In order to continue advancing their illogical arguments
modern liberals have to pretend not to know things.
David Mamet

Donald Trump recently issued two different executive orders banning people from a few problematic Islamic countries from entering the US; in both cases, the orders have been blocked by rulings issued by district judges, despite the fact that travel restrictions on foreigners are a specific prerogative of the President of the United States, meant to protect the country’s interests. 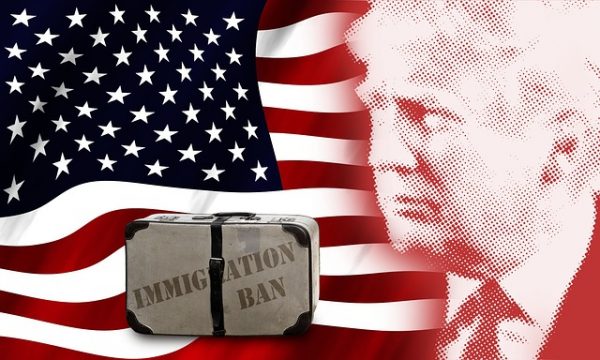 Unnecessary explanation of the legal theater (please skip it)

To get to block the orders, they needed a pretty creative interpretation of a 1965 (Hart-Celler) Act, stating that you shouldn’t discriminate visa applicants based on “race, sex, nationality, place of birth, or place of residence”

Any sane person would argue that limiting immigration from a country where a chant of “Death to America” is the most popular song is not only sensible, but necessarily a prerogative of the executive branch; that’s a reasonable discrimination. Only after security restrictions have been applied, you may want to avoid unjust discrimination based, for instance, on the place of residence.
Assuming you could come up with some clever legal tricks to circumvent this call to mental sanity, that would only mean that it is the legal system which is insane: possibly forced by formal constraints to favor those who want to destroy it.
The fact that many decent and pacific people would want to come from those very same dangerous societies is irrelevant from a terrorism prevention point of view.

But there’s more: the whole public debate is based on wild inferences treated like indisputable truths.

1 has no weight in legal terms; 2 is about the pretense of judging an executive order by one’s interpretation of the purported thoughts of the President instead that by its content: an abomination for any self-respecting jurist.
3 is stretching a rule to accommodate a political view; 4 is supposedly the core of the issue, but has no legal basis, and it’s burdening a nation with an impossible standard: being required to guarantee the alleged rights of any human being on the planet, regardless of feasibility.

The gist of it

Most of what is discussed on TV is useless nonsense because every party involved is playing “let’s pretend”.

→ A problem of jurisdiction is conflated with the matter at hand, so that debates are conveniently steered towards technicalities and side issues: everybody’s happy because both sides stood their ground while keeping their assumptions unchallenged.

→ Trump’s supporters are often insisting that preventing entry from countries like Syria and Iran, but allowing it from Saudi Arabia and Pakistan, is a demonstration of the fact that this is not at all about Islam (well, it is…).
→ Democrats on the other hand are pretending that any measure of restriction implying a perceived risk about radical Islam is, by definition, islamophobic, unacceptable, unworthy of the US values because it “discriminates”. In other words, “the Muslims” represent a huge victim group, if you do something about some (wannabe terrorist) Muslims, you are hating and attacking the entire victim group.

They apparently deserve special protection because

A ) they are victims

B ) they are dangerous.

You can’t sacrifice your country on the altar of the abstract principle of “not discriminating based on religion”.

Religions represent worldviews. If someone’s understanding of life implies his sacred duty to subjugate you and to violently tear apart your society, you better take notice, instead of pretending not to know.

The fact that his idea of jihad is also part of a religion (hence potentially protected) is not the primary factor: a threat to the existence of a society is more fundamental than how people are free to worship and express their ideas within said society.
The aggressive message that is developed from Islam’s most authoritative schools of thought can’t be swept under the rug.
I’m obviously not saying that all Muslims want to wage a jihad against America or anyone. The point is that some (many) do, and they are very determined, resourceful, and convinced of the inevitability of their victory. Which is an explosive combination.
Especially if you consider yourself righteous and enlightened whenever you get the opportunity to proclaim: “Move on, nothing to see here, everything’s OK!”

Ideas have consequences. As per David Mamet’s quote, liberals pretend to ignore what they can easily see. This is what Evan Sayet calls “the cult of indiscriminateness”.
As a leftist, you must signal your openness and lack of prejudice by ignoring obvious differences. Pretending that among passengers boarding a plane, a wheelchaired grandma from Vermont, a grizzled Dutch businessman and a 5 years old boy from California deserve the same level of scrutiny from TSA agents as a young Yemeni in traditional garb.

What lies behind the orders

To understand Trump’s approach you must appreciate how he’s trying to move the ball forward while facing very significant constraints, from a society that is utterly unprepared to face an ideological threat that is cloaked within a religion.

A travel ban from certain Muslim countries isn’t actually about those countries. It’s about creating an opportunity for a cultural shift. Understanding that there’s a real and present danger from the so-called “Radical Islam”, and you have the duty to weed out those who subscribe to it.
It’s not about criminalizing peaceful Muslims; but as you may have appreciated from his speeches after the San Bernardino shooting, Trump emphasized how normal people in the Islamic community were aiding and abetting, or at least closing an eye on, the two perpetrators.
This means, even if we’re still at the early stages, a call to all peaceful Muslims to distance themselves so much from those “radicals”, and not just in terms of violence but also of ideology (read: Sharia prescriptions) that no one could mistake one for the other, and any emerging radicals would be promptly denounced as enemies by the Muslims themselves, instead of being feared and secretly admired.

Trump’s efforts could represent the embryo stage of the only possible western approach to Islam: forcing Muslim to choose between two different versions of it. One Islam that could integrate into a modern society; another Islam that is hell-bent on destroying and subjugating it. The latter would be banned as a imperialistic ideology. Self-vetting is the goal.

It’s kind of a long shot, but you must be aware of the consequences of the alternative, the liberal “Do nothing but pretend that the only problem is Islamophobia”: submission.

The USA won’t budge. Americans are resilient. They will choose sanity over a self-destructive utopia.

If you think you won a battle against Trump, you are a fool

Some leftists apparently enjoy the warm feeling of being able to stop the President, albeit through a toxic clash of powers due to judicial overreach.
First of all, Trump has multiple possible paths to obtain what he wants. If everything else fails, he could take the issue to the Supreme Court, that will soon be Republican-controlled.
But let’s say, for the sake of the argument, that you get your way, the judicial blocks stay in place for the next 4 (8) years and Trump is therefore unable to prevent people from dangerous countries, unvetted Muslim aliens, from entering the US. Fine.
-Let’s say that for the entire duration of Trump’s tenure, not a single terrorist manages to launch an attack on US soil. It’s a huge success for Trump: he was able to protect the country!
-What if instead, God forbid, one or more terrorist attacks happen? Well, it could be blamed on the Democrats and the judges preventing him from implementing a proper security plan!