UPDATE– She lost, as predicted.

Since Macron’s victory is even more pronounced than was indicated by the polls when I wrote my article (in fact it seems people gradually increased their support for the creepy puppet guy in the last few days before the election), I might add there’s one obvious, additional effect in place.
The natural instinct for moderation that is part of our DNA, so to speak, has been quietly exploited to reinforce the transformational trend: more EU, more immigration, more gender theory indoctrination in schools, more euthanasia, more globalization, more appeasement efforts to reach out to Islamists, less freedom of speech.
Since this revolution is the new normal, and having something to say against it is sufficient to be described as a dangerous racist, homophobe, islamophobe etc., French voters reacted in a way similar to their Austrian and Dutch cousins in recent elections: staying on the perceived safe side, same ol’ same ol’, avoiding the “risks” connected with following a completely new path. Too bad the new path tries to restore sanity, beyond restoring a civilization. While on the contrary the same old political scenario is a train wreck of self-hatred and failed recipes, wasting away what remains of the middle class and a cultural European identity.

In a way Trump’s and Brexit’s successes are the primal cause of this disappointing result: a sort of ill-advised counterbalance effect, a prudent attitude gone awry suggested millions of baguette-eaters that they had to let the System win, this time. After all they even got the chance to “choose” a fresh, new (cosmetic) alternative, so that even their tickling urge for some kind of change has been quelled…

Two fundamental problems remain for Le Pen: she’s neither capable to convince enough voters (due to structural, not personal reasons) nor capable to embody our civilization in its authentic roots.

As for the reaction that eventually will emerge in a future, when the situation will be way more compromised… well, you won’t like it. 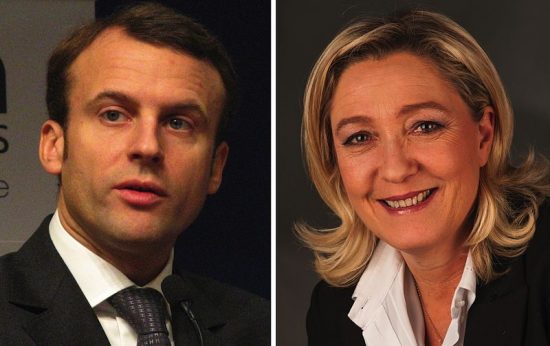 Tl;dr: NO.
France is the typical representative of a sort of European longing for self-destruction.
Most people aren’t reacting to the gradual disappearance of their civilization. At least for now. Not in decisive numbers anyway. And when they’ll do, it will probably be too late.

That’s what happens when you’ve been brainwashed into thinking that defending your world and your way of life is a bigoted, unacceptable and inhuman decision you really can’t take.

Since I predicted Trump’s victory one would think I’m trying to establish my credentials as a crystal ball political commentator. This is not the case.
I don’t know enough of France’s politics to even begin to formulate an informed prevision. Take what I’m going to say with a grain of salt.

As far as I can see, the Nationalist candidate may (and probably will) get closer to 50% than the polls are indicating right now (around 60% for Macron, 40% for Le Pen). But she’s not getting enough support. I don’t see her realistically winning. This is no Trump, and more importantly, France is no America.

DISCLAIMER: I don’t really like Marine Le Pen. I don’t trust her. Yet I’d still vote for her if I were a French citizen, and urge others to do so.

Muslim voters are a decisive factor.

There’s no official census data about the religious affiliation of French citizens, due to an absurd XIX Century law that was promulgated in perfect accordance with the “Enlightenment” spirit of militant secularism: aiming at marginalizing the spiritual life of the populace, eventually weakening the very fabric of a society.
Muslims of voting age represent roughly 10% of the population. If you consider other non-assimilated citizens of foreign origin, people who don’t see France as their Patrie, their home country, hence they will vote against the Nationalist candidate, it’s quite probable that the destiny of the country will be decided by those who came to overcome it, consciously or not.

In other words, the ripe fruit of a top-down approach to religion meant to destroy Christianity will be the triumph of a more primitive religion.
Nature abhors a void: you can’t really build a new France on the idea of multiculturalism, where there are no fundamental values to live or die for (in perfect Imagine-Lennon style). A stronger value system, figuratively stronger by the sword, will fill this void.

It is already too late, in a sense. Population substitution has begun earlier in France than in other parts of the continent. The “real French” would have chosen a different destiny. But only by a small margin. In fact…

Marine Le Pen is too French. Excuse my blunt pun. Her problem is France’s problem.
The French Revolution is the archetype of everything bad that happened to our value system.
The Rot of the Western Civilization.

The sheer hypocrisy of chanting “Fraternité” while decapitating thousands of people in the name of a tyranny has been transformed in a defining factor for France’s self-image.
You can’t really say anything bad about la Révolution. National Pride wouldn’t permit that.

Even those who react to this absurd system of thought, capable only of demolishing without having something to offer in exchange, have been deeply influenced by its vision.
That’s why Marine Le Pen can’t really be a Christian leader, nor she’s ever wanted to be one, nor her electorate expects her to be, for the most part.
And even if she were, her answers would be more coherent and self-consistent, but in this media environment, they wouldn’t be more convincing.

You can’t pretend to defend a civilization if you’re not at least trying to stand for the most essential moral values: opposing the current social transformation trend that is challenging not just the idea of what it means to be French and love France, but to be a man and love a woman, to be a mother and not kill a fetus in your womb, to be gravely ill without loving death…

That’s something the modern politician Marine isn’t prepared to do.
And no leader could emerge in France winning on a platform of that sort.

Duping the electorate is now officially a élite sport

Consider Emmanuel Macron. He’s really the most unlikely candidate: young, inexperienced, hardly a charming talker, married to his ex-teacher…
Representing a new, non-existent “movement”, a timely smokescreen substitute for the traditional parties, now in disgrace after they carried water for the Euro-globalists.

You’re left wandering: are perchance the most powerful men of France/Europe (very effectively) planning how to control the result of the election, and being so self-confident of their power, they decided to toy with their subjects, putting a Mr.Nobody with personal (relational) issues in power just for kicks?

Or, possibly, isn’t just perfect that those nominally in power happen to be particularly flawed human beings (see the alcoholic European Commission President Jean-Claude Juncker as another example)? A puppet should have pretty obvious weaknesses.

After all, the real crux is the ideology. Don’t challenge the course of events. People feel compelled to act as good, responsible citizens, avoiding the company of dangerous populists, cheering for the European Union in the name of Peace and Solidarity…

The clock is ticking. The further down the road of the European Project, the closer it becomes to completion, i.e. to its demise.

The bigger the country, the easier it becomes to manipulate its citizenry into submission, exploiting the predictability of human nature.
You can’t expect anything containing tens of millions of inhabitants to survive this onslaught of propaganda, moral blackmail and self-loathing targeting the very foundations of a (once) Christian society.

Right now I’m inclined to think that some European countries will cease to exist, at least as orderly, modern societies, while others will learn from those mistakes and try to follow a different route.