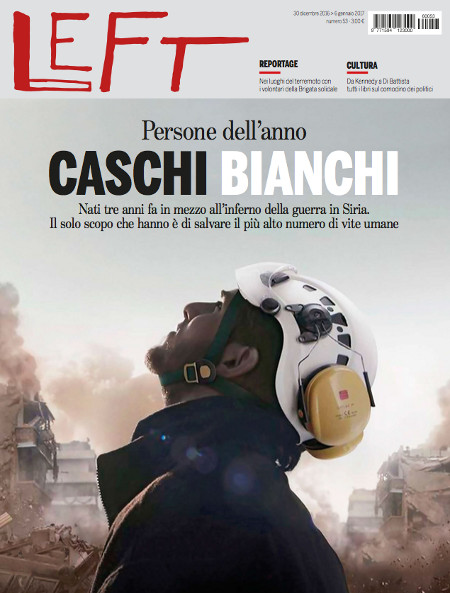 A leftist Italian Magazine cover: presenting the pro-Al Qaeda “White Helmets” to be named “Person of the Year”. The title explicitly states their only goal is saving as many lives as they can, which is… well, debatable.

As you probably already know, yesterday tens of people have been killed in Idlib, Syria, seemingly as a consequence of chemical weapons being released in the air.
Horrible images of civilians and children, gasping for air or already dead, have been disseminated around the mediasphere.
According to reports, the Syrian Army attacked the rebel-controlled territory using Sarin gas.

The source: a so-called Observatory for Human Rights, a well-known propaganda operation based in London, part of an international concerted effort to remove the Syrian President Bashar Assad from power, favoring the “rebels” (essentially ISIS, Al-Qaeda spin-offs and their allies) that are at war with the lawfully elected government/regime since 2011.

The White Helmets portrayed in the photos and videos, providing assistance to the injured victims, are part of a seemingly benign humanitarian organization, but in reality support the jihadist murderers and their goals.
This is activism today: noble candidates for the Nobel Peace Prize, portrayed as selfless heroes in an Oscar-winning documentary… but if you care to investigate a little, their true colors are revealed. Their rescue operations have one essential element: cameras.
Could we trust footage coming from an organization that is integrated in the Al Nusra Front (Al Qaeda)? Well, on the other hand, they are receiving copious amounts of money from the West. Oh, snap!

Background
The events preceding the liberation of Aleppo, back in December, have been a clear example of how a modern (partially) asymmetrical war is conducted, though in vain in this case. Media manipulation is key. Influencing public opinion in the West is often more decisive than having a superior military. That’s why, while the bloodthirsty Islamists were rapidly losing ground, many leftist groups and humanitarian organizations were all of a sudden remembering there was a war in Syria, hastily urging the world to broker a peace, to do something, to stop Assad, to stop the massacre.

But people increasingly don’t buy it. And armies are often still a decisive factor.

All those activists embedded with Islamist radicals, sending melodramatic tweets and video messages from sieged Aleppo on the brink of capitulation, could do little for the losing cause of creating a permanent jihadist caliphate at the expense of the far-from-ideal governments of Syria and Iraq.

Despite the fact that many westerners, especially on the left, still buy this kind of emotional manipulation through one-sided reports and shameless propaganda, Assad won that battle. Thanks to Russia, the war took a clear turn months ago. The election of Trump sealed the fate of the pretentious ISIS caliphate.

It’s only a matter of time.

There’s a lot of stuff that would need some unpacking (just my list of webpages and reports I wanted to use as reference to discuss the Syrian war has become unwieldy), but the bottom line for this last episode is that this is a fake news operation.
The jihadis have access to chemical weapons; the limited amount of chemical agents that caused those deaths must have come from one of their warehouses.

Wars rarely take more than a turn. When they do, there’s an external factor involved, a damn good reason. Assad was already winning; the only new development is the advent of Trump, who wants to destroy ISIS. Things are getting even better for the Syrian president.
There’s no way Assad would rock the boat, creating the opportunity for the international community to attack him. It would make absolutely no sense.
Tens of dead civilians can’t be a military objective; they are only relevant to those willing to play the victim card. Chemical weapons are especially suspect in this regard, because they maximize the western world indignant reaction.

There’s a reason I picked some examples of dramatic photos from Syria in my earlier article discussing the problem with believing your lying eyes in the age of image.
How could you separate the wheat from chaff in the reports coming from a war zone? Especially since the juiciest content, sad to say, is represented by heartbreaking photos of dead children: who wants to be called out as the one who callously disregarded such tragedies? You’re being played through your emotions.

The criteria for judging events where you don’t have a direct access to a reliable source are far from obvious, but this doesn’t mean you can’t come to solid conclusions. The key lies in understanding the motives, opportunities, psychology of the parties involved.

This time the jihadis overplayed their hand; the sheer implausibility of an Assad chemical attack right now is so obvious that I’m willing to do away with my residual doubts. Thinking back of the 2013 Sarin gas attack on the Damascus suburb of Ghouta, the perpetrators must have been the rebels in that occasion too.
EDIT (on a Good Friday, learning to humble myself): a proper “red pill” is about not taking an official reconstruction at face value, but also avoiding the hallucinations of conspiracy theorists. Finding the truth is always a painful process; if you aren’t haunted by doubts from time to time, you’re not doing it right. You’d end up believing a reassuring, partisan lie anyway.
I’ve seen too many conspiracy theorists rushing to judgement to feel comfortable maintaining seemingly similar positions on certain events.
After some back and forth in the last few days, I’m again convinced that those chemical attacks weren’t ordered by Assad.
But there’s no point in acting so self-confident and assertive… Some stories are too much to swallow for mere internet observer like myself.
This is a life lesson: I’ve been too impulsive.
I’ll have more to say about the subject after Easter.

Friends and alternative media surprise me

After the news of the Idlib victims began circulating, I was surprised by the flood of articles from multiple sources (In Italian and in English) and Facebook comments by many friends, that were all pointing in the same direction: this whole story stinks of fake news. We mourn and pray for those poor souls, but we aren’t buying the official mainstream media explanation.
Lots of clever, detailed, in-depth analyses that shred the official narrative to pieces. Even some top tier newspapers were reluctant to blame Assad, knowing that this was simply too much.

I was relieved that, notwithstanding the one-sided view of international affairs that is prevalent in the US, usually putting Republicans on the same side of Democrats (Russia as the most dangerous foe, Assad as a cruel dictator that must be defeated…), both Scott Adams and Sundance from the Conservative Treehouse, i.e. precious independent voices and fellow Trump-victory-predictors, were rejecting the narrative and suggesting that Trump must avoid condemning Assad, as the administration was already forced to do, basically in order to be true to expectations.
Their idea, which I share, is that Trump is letting the fake indignation and anti-Assad punditry run wild for now, but he’ll gradually move the position of the US Government away from the shallows of the Obama era.
All in all, plenty of observers going against the grain. These are special times indeed.
To think of it, I got the impression that progressives seem way less interested in commenting and sharing content on this subject. In other words, most of the people who accept the mainstream view and take TVs and newspapers at face value aren’t very interested in gathering information and delving deeper.

That’s the rationale for the following tongue-in-cheek diagram.

The Blumudus Law Of Red Pills

People on different political sides certainly disagree on the subject matter, but you’d think this ideological divide wouldn’t involve their methods, willingness to discuss and personal commitment…
Notwithstanding the worrying increase in self-referential thought, oversimplification and tunnel vision across the spectrum, there’s a significant and unexpected difference in the attitude with which people consume news, interpret reality, understand social problems.

The Left Parties and most of the media have become the reference point for people who choose ignorance, led by a few smart leaders. 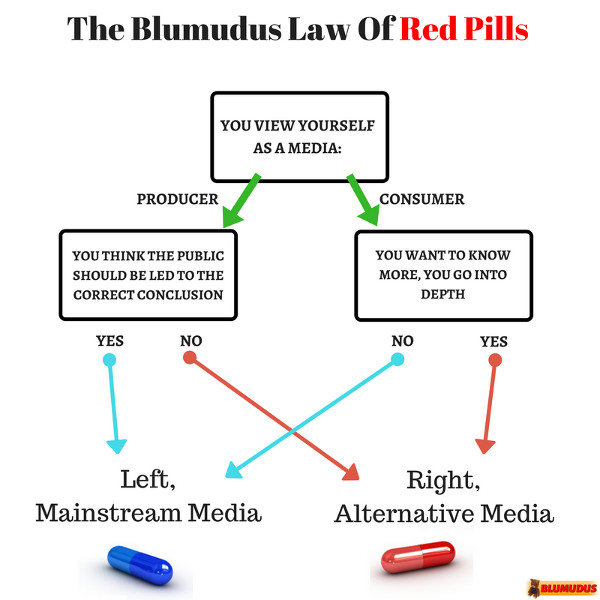 I find this development disturbing: Donald Trump, undoubtedly after consulting the allies in the region, decided to conduct a selective attack on the Syrian airbase from which, allegedly, the chemical attack was launched.

The Tomahawk strikes were aimed at military installations, minimizing casualties. But still, this is the first occurrence of such an attack, officially launched by the US, in the Syrian conflict.

More importantly, Rex Tillerson declared that, after ISIS is defeated, the US Government wants Assad to step down.

This has potentially extremely dangerous ramifications: the Sunni powers that pushed for years for the ouster of the (Iran ally) Bashar Assad will eventually collect their trophy. Further destabilization of the region is to be predicted.
Too many forces converged to cause this epilogue; Trump seems unwilling to go against the grain in this case, he’s at least officially buying into the official (terrorist-backed) accounts and will only try to create the conditions for a peaceful transition of power. Which is not in the cards, I’m afraid. Not at least as a permanent solution.

See what SpondaSud, an Italian online magazine had to say (criticizing the dismal state of modern journalism standards):

It’s common knowledge: when sarin is used in a concentrated area, it’s capable of killing thousands of people. And yet, dealing with such extremely dangerous gas, the white helmets touched the bodies without any precautions, with their faces constantly facing the camera. […]

Moreover, it’s astonishing that during such a crisis a doctor took the time to tweet and perform video calls. All of this while he was at the hospital, neglecting the many injured persons pouring in

The mentioned doctor, Shajul Islam, is an Islamist fanatic. In the UK he managed to avoid conviction by a nose (the witnesses didn’t show up at the trial) and he’s been disallowed from practicing medicine due to incompetence.

But the most significant bit of information that we get from SpondaSud, easily overlooked by many, is this:

a Orient TV (Syrian opposition channel) reporter published on his Twitter profile the following post, on the day before the attack: “Tomorrow we will launch a media campaign against the massive air strikes and the use of chlorine gas against civilians in the Hama province”.

So, was the entire operation staged after all (even if the tweet didn’t indicate the correct location)?