Home God Why all those Saints?

Why all those Saints?

Let me open with one of the few Oscar Wilde quotes that actually make sense:

The Roman Catholic Church is for saints and sinners alone – for respectable people, the Anglican Church will do.

Yesterday was All Saints’ Day in the Catholic Church liturgy.
Some may consider it an outdated feast; the celebration of a concept almost incomprehensible in today’s dynamic and enlightened world. I’m afraid this just means we desperately need more saints but we don’t know it yet.

The modern ordinary man has forsaken heroism, has no use for eccentrics who chose humility and obscurity in service of their brethren.
Saints are the true nonconformists. Also, the only chaps who could try and save our sinking ship.

Maybe those stubborn Catholics have something to give to the world after all. With their insistence on a faith that can’t rest on the false certainty of one’s salvation being already achieved. If your spot in Heaven is safely booked there’s little incentive to push the envelope of good behavior.

But for today I’d rather focus on a different topic. Not the call to holiness but what comes after:

The cult of the saints (gasp!)

What for? Isn’t this cult counterproductive? Doesn’t it detract from the pure worship of the only God?

Sounds incredible I have to lay the concept down, but human beings don’t find fulfillment in a faith that has become dry, cerebral, stripped down to the bare essential.
Cut on the rites, feasts, statues, processions, incense, devotions… that’s how you impoverish your religious experience.
Worse, if you abolish the Sacraments and the prayer of intercession that’s akin to mutilating your spirit.

Picture yourself standing alone, naked in front of the Almighty God: that’s how you feel the burden of His judgment.
Crushed. In the dark. In a void. While for how much light could reach you, coming directly from the Light, that’s when your void and your dark become even more unbearable. By way of contrast.

Of course, Jesus Christ is the One And Only Mediator, at least in the proper sense.
But you see, for us mortals things like living, communicating and connecting, failing and getting back on track happen through (and often require) all sorts of mediations, at every level. God doesn’t need any help but we sure do!
Beginning from our own mother, up to those quaint saints in Heaven and everyone in between, including a friend who’s praying for us right now. Anyone can help us bridge the gap.

Even if we had no emotional need for intercession there’s a treasure to be found in all those diverse stories of humans like us who welcomed the Mystery to reshape their lives. Stories of saints we can relate to.

In order to better illustrate the importance of this human warmth I chose three examples of holiness, trying to approach them through the eyes of someone who’s struggling with a life crisis.
(These are not your traditional patron saints: I caught the opportunity to highlight some not-so-obvious / lesser known types, thanks to the extraordinary variety of saints’ characters.)
Here’s your sinners in need of a holy connection:

1. A wrathful man, on the brink of ruining everything in a fit of rage.
2. Someone who’s been betrayed by his/her spouse. Marinating in a state of bitter anguish, gasping for breath but unable to visualize a release from the torment.
3. Someone who’s considering suicide.

No intellectual call to recognize the concept of God’s love is likely to move these three poor souls experiencing the dark abyss. Not at least during that crucial hour of rage and despair.
Even if a good Christian were to come at the right place at the right time to remind them of the Almighty, carefully laying down the most opportune words, nothing would likely come out of that. You could even obtain the opposite reaction.
What about Jesus Christ and his sacrifice on the Cross? Yes, closer to our world, more tangible and relatable. But still! The Cross is too much. He’s so heroic that you can’t face his glance while embroiled in your pathetic wretched sins and misfortunes. Typically you’d hide yourself from the God Jesus.
We don’t usually allow being touched from those heights.

Probably the most famous nun in the US for the last 50 years, thanks to her being a TV star of sorts. This feisty woman managed to build a television media empire, tasked with spreading the Gospel. Her future canonization as a saint is easy to predict.
Well, all this is nice and good, but it’s been reported that she had a difficult character. She was described as a hothead: she had to learn how to channel her bad temper and stubbornness to higher goals.

Now imagine a wrathful guy who gets to know that he’s got this in common with Mother Angelica. A strange feeling indeed: a holy woman like that somehow was close to his personal experience.
Imagine the same guy being instructed to remember her in his prayers.
This is not about just knowing a fact or two about a public figure. Only frequent, maybe daily prayers can create a strong emotional connection. Even simply thinking about her from time to time might do the trick.
The point is, over time our “hothead” guy is in a position to learn to control his fits of rage; not as a fog where an uncontrollable craving for destruction takes the lead, on the contrary: a stepping stone on the difficult path to self-control; one where he could share his progress with his friend the nun who’s watching him. Crazy enough, huh?

Creating a sort of familiarity with a saint, talking to him/her from time to time. Can’t we stipulate that’s a strategy bound to help?
I’d assert that limiting yourself to reading a passage from the Bible or meditating isn’t going to deliver the same kind of results.
Could you realistically picture yourself becoming so nonchalantly intimate with Jesus Christ himself instead?

Those few who tried keeping a holy pal at hand all the time could vouch for this approach.
It’s a pity this opportunity is often ignored or even unheard of among Catholics!

Born in a noble family in the 2nd half of the XV century, her parents gave her in marriage to a count, her desire to follow her religious vocation notwithstanding.
She eventually became a Franciscan Tertiary, living in her palace as if it were a convent, while her dissolute husband not only cheated on her but he had the guts to bring his lover to live under their same roof.
Paola put up with the affront, concentrating on her life of prayer and helping the poor.
The day came for her rival, her husband’s lover, to fall ill. The blessed went to her deathbed, told her she forgave her, then quietly attended to her until her death.
Eventually even her husband was won over by her holy determination: he had a conversion and became a new man.

Now, of course most women will find this unique story off-putting, since it goes against everything feminism teaches. I myself -while admiring this paragon of virtue- recognize the exceptional nature of such a turn of events, while under normal circumstances I’d tentatively suggest most wives to kick out a pig like that from their home.

Nonetheless this heroism does more for us than teach about seemingly superhuman endurance. We need to learn to relate to the blessed Gambara as a real person; someone who’s walking with us and understands our suffering… that’s one way of finding in us the strength to put up with wrongs and betrayals.

I want to prevent the objection: shouldn’t we recognize that God Himself is surely perfectly capable of understanding what lies in the deepest recesses of our hearts, while a saint may at most obtain such information through Him? (We don’t want no intermediary…)
Sure! But this abstract reasoning doesn’t click with our emotional needs. Knowing that we could always address God directly doesn’t help us muster the courage to do so. 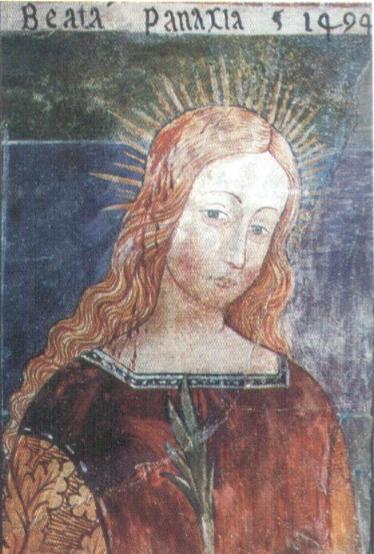 A short, heart-wrenching story from the XIV century.
This motherless girl, Panacea, is being oppressed by her stepmother.
Her occupation is grazing her family’s sheep; that leaves her plenty of time to pray.
One day since she’s running very late her stepmother, Margherita, decides to climb the hill in search for her. She finds the young Panacea in the vicinity of an old church, still absorbed by her prayers. Margherita beats her so hard that she dies on the spot. Horrified by what she has done, the desperate woman commits suicide by jumping in a ravine.

Think of a person tormented by horrible thoughts, who’s contemplating the idea of suicide; maybe he/she finds his/her world intolerable; maybe everything seems out of control; often the whole idea boils down to a narcissistic act aiming at creating devastating guilt traps for relatives and people who care for the wretch.
Even if she were willing to open up a bit with a friend it’s hard to crack her tiny little universe made of sorrow, resentment, pettiness, fear, shame and who knows what else.

Your best bet is an unexpected voice, surprising her with a change of perspective that redefines the whole scenario. A reset button.
Not the psychologist encouraging patients to stir and toy with their mental excrements, but a confessor who slaps you in the face and shouts: “this is wrong, you’re not doing it!”

A mighty, unlikely help could come from the young Panacea. Invisibly present at your side, desperately clasping you in her arms: determined to stop people from repeating her stepmother’s insane action, or at least consoling those who lost a close relative in such intolerable manner.

Some tears feel so noble and wholesome that I’m convinced they’re shed even in the beatitude of Heaven.