You can’t spell doom without BS, and BS is bound to become the Democrat nominee for President.

But wait, it gets worse.

Yes, this time Bernie Sanders has a real shot at becoming the next President of the United States. Despite the spectacular Trump performance so far, but thanks to Coronavirus Covid-19. 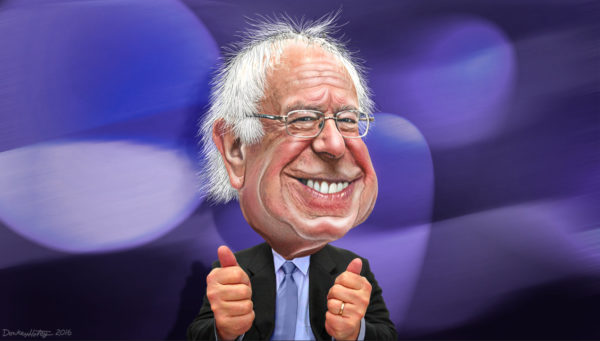 First of all, the nomination.

The Democrat camp looks like a train wreckage engulfed in a dumpster fire surrounded by diseased hyenas gloomily laughing at the whole spectacle (I don’t do drugs, BTW).

Briefly, here’s my assessment, as seen from the point of view of a total outsider, considering the main contenders:

– Joe Biden: a pathological liar, a corrupt career politician with absolutely no redeeming qualities. Even his very own words prove beyond reasonable doubt that he’s dishonest and should be tried for abusing the office of Vice President for personal gain.
Also old, a sex pervert and prone to embarrassing blunders, often proving himself unable to remember what they instructed him to say or to distinguish reality from fiction.

– Mike Bloomberg: a billionaire who thinks he could buy the presidency, here’s another example of someone who isn’t even able to deliver the talking points they prepared for him. Debate performances even worse than Biden’s!
Despised both by the left and the right for his policies as NY mayor, the most improbable candidate for a party that swerved wildly to the left.

– Elizabeth Warren (AKA Pocahontas): not only under different circumstances you’d expect her career to have gone down in flames when it was revealed she lied, pretending she was a Native American, in order to get unfair advantages in the academia. She’s also widely recognizable as a bitter, nasty and unpleasant person.

– Pete Buttgieg: after last debate he’s officially out of the race. A nobody: a small town mayor with a name that sounds like a joke (but then you learn that it’s somehow pronounced Buddha Judge). The only reason for his call to fame: he’s gay, and that’s a terrific, earth-shattering plus in your resume nowadays. Shameful.

and then, of course, there’s
– Bernie Sanders: an old white man, nostalgic of communism (he even honeymooned in the USSR); he’s the most out of place of all candidates if you just pause for a moment to consider this is the USA we’re talking about.
A socialist, a man that never accomplished anything and has no understanding of how markets and societies work, but is strong on stale rhetoric and sounds alternative, bold, anti-establishment, in a word: new.
Historical cycles doing their magic: he’s so old and out of touch that his words eventually became new, fresh and enticing.

The most significant electoral force in our time is a form of protest against people in power.
It’s quite hard to offer an alternative to the status quo from the point of view of the Right, as Trump was able to do.
It’s extremely easy to offer anti-capitalist “solutions” taking advantage of crises, inequality, exploitation (real or imaginary), globalization imbalances.

Eventually, if enough people feel dissatisfied, they’ll tend to follow the easier path and a snowball effect will kick in.
Enough with the freedom, prosperity and anti-statism rhetoric, hello-o free stuff and taking revenge on the rich.

The Democrat winner is bound to be a radical alternative, the only candidate that is defying cliches and offering some form of hope.
In a vacuum of ideas, even a decrepit, anti-human ideology sounds meaningful and desirable.
Party officials have no grounds to complain: they encouraged the race to the extremes. The fruit is ripe.

I’m writing this piece ahead of the Super Tuesday where a significant portion of the Dem primary will unfold. This looks increasingly Biden vs. Sanders (as candidates leaving the race have endorsed the establishment bumbling idiot), with predictable results.
Don’t get me wrong: the establishment will do anything they can to prevent a Sanders victory, but in the long run that’s precisely what causes it, if they don’t time it perfectly, as a form of angry reaction. And they have the wrong horse to bet on.
Remember: they cheated against Sanders even in 2016, as in part I reported at the time (see Exhibit 1: the Michigan Primary Case).

Well, but what about the presidency? Isn’t Trump very close to being re-elected, with such inept and dysfunctional adversaries?

The sad truth is, the most decisive factors in an election are those least under the responsibility of a president seeking re-election. If the entire world is plunging into a deep recession/depression, and there’s absolutely no way you could have averted it, they’ll punish you anyway and choose any old geezer who happens to be “the alternative” on the ticket.

So far Trump’s strategy, economy-wise, was that of limping into 2021, running on fumes, hoping the worst was somehow at least postponed as much as possible. In the meantime trying to better position the US in the global scene. In fact the US did improve way more than expected, while other countries had already stalled in 2019.
A sensible choice, also the only good hand he could play, and this administration delivered.
But now a new intervening factor, a black swan event, could reshuffle the deck in disturbing ways.

I know, it sounds callous to discuss the political consequences of a global epidemic when there’s so much suffering and deaths to focus on. But please, bear with me.

There’s three angles to Sanders’ race to victory due to Covid-19.

• How the emergency is handled.
Here putting Mike Pence in charge of managing the Coronavirus crisis is a smart move, since he’s expendable and could function as an effective scapegoat, leaving the door open to a different running mate for the next election. But it’s still not enough. America was surprisingly behind in Coronavirus testing, mainly due to faulty test kits, plus Pence, Trump and other authorities seem to greatly underestimate the problem. People want someone to blame. Reassuring messages that seem reasonable right now will be remembered as a sign of incompetence.

• Healthcare issues.
When stories of inefficiency, bureaucratic nightmares and health insurance blunders abound, a complicated tirade on how you hope to make the system become more effective, cheaper and personalized won’t gain much support. The (inter)national emergency primes the electorate for a call to coordination and centralization, where Sanders’ proposal, Medicare for all, would sound better even if it weren’t promising “free” healthcare.

• Consequences to the economy.
The world economy was already doomed to face a gigantic crash, in fact we’ve been waiting this catastrophic event for a long time. Even Trump himself discussed the issue during the 2016 campaign.
Despite America’s recent successes, the rest of the world was already entering a crisis. It was probably a matter of months anyway.
This epidemic is causing ginormous problems to the supply chains of the entire world, nowadays deeply dependent on China. It’s true that it serves as the perfect excuse for politicians and CEOs to justify all the red ink and debt restructuring that will follow, even if not directly related. A reset button, if you will.

And it’s remarkable that Trump’s anti-globalist stance seems now even more commendable, wise and prescient because it anticipated a necessary restructuring and rethinking of our market economies, perilously focused on short term gains, financial goals divorced from real demand for tangible goods and services, and excessive reliance on international trade, cheap labor and industries relocated in the Far East.
And yet…

At the end of the day, if the economy tanks, and it will, they’re going to blame the guy “in charge”. Many voters won’t, but what really matters is that enough of them will tilt the scale.

Am I convinced this is how it ends? I don’t know, but it’s a distinct possibility.

The kind of damage that a Bernie Sanders could bring to the once most advanced, prosperous and free country in the world is unfathomable.
I just began to scratch the surface of the problem in my mind, but I would need time to process this thought.
The world cannot afford a Socialist United States of America.
This should not pass.

…Or maybe 4 years of Sanders could become the spur that Americans needed to react and build a stronger, saner political alternative.
Another shock, another reset button.