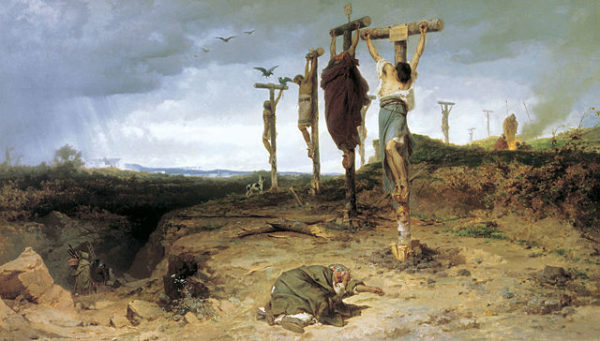 Some food for thought, an inspiration coming from last Sunday’s Mass reading.
I promise: if you’re not Catholic (heck, even if you’re an atheist) you can find this article worth reading, since the following Bible verse is just a starting point.

but I did not want to do anything without your consent, so that the good you do might not be forced but voluntary.

In this letter Saint Paul tells his friend Philemon that he’s sending back to him a slave named Onesimus, converted by Paul to Christianity but still technically a property of his master Philemon. Paul explicitly asks him to free Onesimus and to keep him as a brother from that moment on.

The most crucial (and misunderstood) teaching comes from the aforementioned verse 14: the Apostle chose to let Philemon take the lead.
The idea being: let him decide freely if he wants to do the right thing.

That’s it. This is the key to a wisdom with far-reaching consequences. Among other things it became the excuse for a number of attacks on the Catholic Church, for centuries: as if Christians, and Catholics in particular, lacked the courage to do what had to be done.
As if you could fight slavery through fits of collective rage, violent revolts, the demonization of slave masters.

On the contrary, demonizing others is a concept alien to a Christian: a human being may be a prisoner of sin, but never irredeemable and definitely not a demon.

The style of the Catholic Church in particular is that of avoiding confrontation and trying to get people close together. Choosing to build brotherly love even if in practice the result may turn out a failure, at least in the short run. Even if the price to pay is that of seemingly siding with the powerful (whom you abstain from challenging) and the status quo.

Pedagogy for adults that admit their need to grow up

♥ Do you care about fighting racism? Show the beauty of Christian love to racists. Directly. Love them!
On the contrary if you attack them they’ll react in kind and become increasingly bitter and hateful.
Even if you defeated them the former victims would then become the new predominant groups …and they’ll be racist too of course, reversing the roles. As they were encouraged to do. This is caused by our failing to take a step back and break from the sectarian division mentality.

♥ Do you want to fight injustice and exploitation of the poor? Begin by realizing that material wealth can’t be the goal of life. If your mission is convincing the rich to love the poor and vice versa, if you build a community on these premises, in the long run you’ll find on one side plenty of generous people, on the other side lots of grateful fellas.
If instead you become a social justice warrior, your fight will eventually lead to the law of the jungle, where the mightiest wins (usually the rich, although in exceptional cases the poor may prevail, but only temporarily, paying a steep price in terms of violence, death, hatred and misery, and creating a new privileged class anyway). ‘Cause that’s the logic of people obsessing about material possessions; their stuff for the fortunate, other people’s stuff for those whose life is enslaved by desires.

The Christian love route may seem more complicated, but it becomes an opportunity to appreciate the virtue of realism: focusing on facts instead of dreams. The dreams of a society magically made new and perfected through activism.
You may even discover that the poor aren’t naturally good, as some (post-)Marxist men of the cloth maintain.
That disparities and income inequality aren’t necessarily caused by callous exploitation, they’re part of the complex fabric of life (which is chaotic, not just, unpredictable, capable of magnifying the consequences of any small initial disparities).
No one solves the problem of an overcooked steak by burning a different one. You don’t provide housing for the local poor by forcefully taking a mansion from a rich guy.

Here we are about universal principles: love versus statism.

Paul’s perspective couldn’t be further from that of modern progressives, many priests included.  They fixate on Earth and forget about Heaven;  foolishly believing they could build a sort of Garden of Paradise here on Earth, satisfying all of our material needs. As if there were no death.

Yet, even those who don’t believe in a deity may appreciate Paul’s teaching here, just by focusing on the practical implications, based on a sound understanding of human nature.

The pseudo-sociology hell bent on invariably blaming society for a host of widespread problems, the idea that we should get rid of superstructures (and cry about the patriarchy, imperialism, white supremacism…) is, ironically enough, pushed by the same activists that built the kind of faceless, implacable anthill society they rant against. A society meant to rid individuals of any responsibility: everything should happen automatically, following preordained paths, no choices being necessary.
In the long run, no choices being allowed.
The welfare state is expected to take care of your life from cradle to grave:
it decides how to spend your money to protect your right to effective healthcare, plus of course how much should be put aside to cover for your retirement;
the state finds you a job, or gives you a house, food stamps and other forms of aid otherwise;
it should cover for your mistakes through social services, for instance if you have children but were unable to give them a family, or if you’ve developed a drug addiction;
if you’re a criminal it’s expected to find a way to rehabilitate you;
crucially it should take from the rich Paul to benefit the poor Peter;
in Europe it’s even in charge of your charitable donations (to your preferred church and organization) through an automatic allotment of a small sum taken directly from your taxes.

Bureaucrats going by the book i.e. behaving like soulless machines, intrinsically interchangeable because they can’t take initiatives, are increasingly in charge of controlling you and your choices. For your own good, it goes without saying.

Social workers supervise your choices in raising your children, plus they’ll spend most of their youth in the hands of education professionals, paid by the government to teach them how to think and comply, following standardized curricula.

Up to a couple of centuries ago homo sapiens used to tackle any problems by trying to find a solution autonomously, counting on his own brain abilities to devise a plan, then getting his hands dirty, actually doing things.
Nowadays homo civicus reflexively calls for the intervention of the authorities at any opportunity; he lives in a vast hive requiring the coordinated and complex interaction of tens, maybe hundreds of different roles and actors he couldn’t even enumerate. He’s passive and dependent. A tiny cog.

I mean, really. Laws that are good so you don’t have to.
This is not just completely incompatible with the Gospel, it’s against human nature.

It’s not just that there’s no merit in doing the right thing because the police compels you to do so.
Even ignoring the instances of gravely unjust laws, the best case scenario involves pursuing noble goals through conformism; those that aren’t weak and passive, especially when facing a novel imposition, will rebel.
Even if the enlightened ruler manages to successfully repress any and all dissent, the fact of winning through brute force means next time it won’t be a matter of truth or justice: only strength and cold determination will represent a valid argument.

There’s no way around it: reversing the order between means and goals, contradicting the aforementioned verse 14, will cause all hell to break loose, obtaining the opposite of what was desired.

A classical example we’re all too familiar with. Progressives push for a limitless immigration, welcoming anyone who wants to come to western countries regardless of their motives, identity, number, willingness to go by the rules.
This (for the natives) translates to a form of forced cohabitation with the newly arrived. A negative reaction is inevitable, given the shaky premises, and its intensity is directly related to the intensity of the pressure put down by progressives insisting the matter is beyond discussion, anyone opposing it is a racist and -of course- any problems that may arise are his fault.
An entire system built on guilt traps and passive-aggressive demands to comply is unsurprisingly devoid of any form of control, counterbalance or opportunity for rational criticism. It’s inevitably flawed from the get-go and further degenerating down the line. If nobody could dare criticize a host community, shelter or charity, they’ll fall into the wrong hands and become at the very least spending holes. If illegal behavior is excused when the perpetrator is a migrant, the inevitable consequence is that criminal organizations will take control of the undocumented and their fate. When people “fight” racism by associating it with skin color (whites are inevitably racist, blacks cannot be) a mirror image of the racism you’re trying to eradicate will develop (in fact it clearly has). And so on.

There’s no room for reason, prudence, integration. All they do is apply the blueprint for a radically new society, being unable to see things through the eyes of others. Who would doubt a worldview where they’re by definition the Good Guys?

Some leftist politicians now in power in Italy in the recent past hinted at the possibility of the state seizing suitable buildings, even private homes currently not occupied, to provide lodging for migrants.
Yeah, private property. A form of theft anyway, right?
What could possibly go wrong.

A paradox: ignoring material goals and focusing on a promise of eternal life (which in turn means prioritizing universal brotherhood) in the long run brings about the most effective societal development, including material wealth and abundance. This is part of the rich legacy of Christianity.

We could have fought racism, favored integration, sensibly managed legal immigration… we could even have been effective in helping the poor. But in order to do so our society needed to take a radically different direction by rejecting a false idea of progress, instead of embracing its weltanschauung (code words, definitions, worldview).

Dear progressive priests, during last Sunday’s homilies you had the opportunity to comment on the Epistle to Philemon, but you needed to understand it first!
You’re doing the exact opposite of what Paul taught.
One day you’ll be held accountable for your choice: losing many Christians, sheep that were pushed away from the Faith because you were serving them this tasteless swill instead of the Gospel.