The newest and most unexpected superfood! 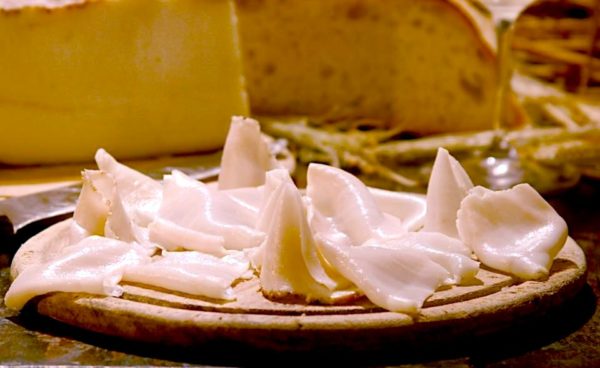 Gluttons rejoice! A new, rigorous study published on MedXriv seems to indicate a clear protective effect against Coronavirus Covid-19 for patients that assume even limited quantities of quality lardo (which is a form of cured pig fat), both in terms of prevention and remission of the pulmonary illness.
Lardo is not to be confused with lard: the former is obtained only from the fatback, which is cured with salt and herbs, then cut and consumed in strips; think of a fatty cousin of bacon. And now it’s bound to become your best hope in fighting the present pandemic.

But before you run to the closest grocery store to pile up on the greasy thing, beware: to obtain a beneficial effect you need only certain high quality types of lardo, like Lardo di Colonnata IGP from the town of Colonnata near Carrara, in the northern part of Tuscany. This Italian delicacy is in fact strictly linked to one of the most famous exports from the region: white marble. The pieces of fatback are in fact cured by putting them in large marble bowls. Somehow this process is giving the resulting cold cuts new anti-viral properties. But how?

To better understand this medical conundrum we interviewed Carlo M. Cipolla, an Italian scientist living in London, who is the principal author of the revolutionary study.

Professor Cipolla, how did you get to such an astonishing discovery?
Well, I have relatives in Carrara and noticed how the spread of the virus in Tuscany has been significantly limited, despite the fact that the region is home to the largest Chinese community in Italy. My sister-in-law had a fever and was coughing constantly, but she ate a few slices of lardo and felt immediately relieved. In a couple of days she was cured. Some acquaintances in Carrara had similar experiences, therefore we decided the phenomenon warranted a thorough investigation.
We quickly assembled a group of volunteers among those who experienced cough and fever to test this hypothesis. Among them, 129 eventually tested positive for Coronavirus. We divided them in 2 groups, one of which consumed lardo three times a day, while the control group used butter in its place. The average time to recovery was 3 days for the lardo group, 9 days for the control (but 4 of the 63 controls needed ICU and another 5 needed hospitalization), the finding being statistically significant.
It’s a real phenomenon.

Fascinating. How do you explain it?

We can’t answer this question yet.
We know that fatty acids represent a necessary building block for our immune system to function properly, but you’d expect health benefits to come from food containing Omega-3 acids, known for their anti-inflammatory properties, if anything.
Nobody expected lardo, which is rich in saturated fats, to be anything but unhealthy. Plus of course modern diets couldn’t realistically be considered deficient in fats.

The explanation should come from somewhere else. We tried a quick followup test where a few volunteers were given cheap discount lardo, and our preliminary results show it had no effect whatsoever.
Therefore we’re suggesting, at least as a working hypothesis, that the secret of lardo di Colonnata lies in the curing process. During the months spent in the marble bowls the fat should acquire some property, or contamination, that would give the product antiviral properties, at least against this coronavirus. It would be interesting to verify if the thing is also effective against other viral agents. 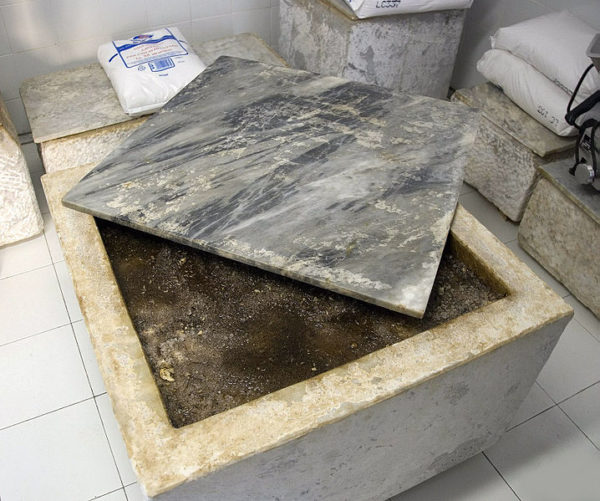 One of the bowls used to cure lardo in Northern Tuscany. The curing lasts from 6 months to 3 years. Photo credit: Christopher Evans

What’s next then? Are we going to see this culinary delicacy being sold on pharmacy shelves?

We’re in talks with several Italian hospitals to begin larger scale trials. Unfortunately, as of now, no UK institution has accepted taking our proposal into consideration.
You can still purchase a small amount of lardo and add it to your panini and cold cut dishes, though. You won’t regret it.

Taking care of your health has never been so easy and self-indulging.

Quite the turn of events, considering that a few years ago the European Union tried to outlaw the production of lardo in marble bowls, considering the process supposedly unsanitary and uncontrolled.

Curing people with cured meat. A sensational discovery from a study conducted by Carlo M. Cipolla and Oliver Cole from the St.Errol College in London.

Amazing, unexpected opportunities for hope in these difficult times.