A Christmas for crucifixes

Getting tired of same ol’ same ol’? Looking for something unique to decorate your Christmas living room? There you go: 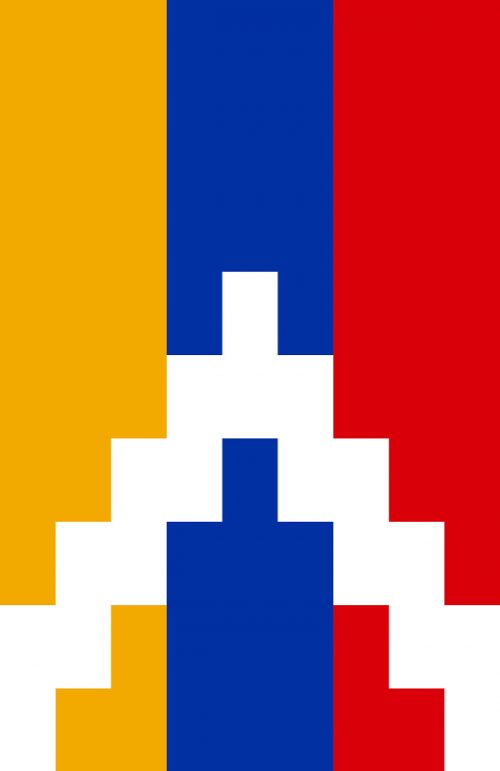 A rotated Nagorno-Karabakh flag, morphed into an impromptu Christmas tree.

The Republic of Artsakh, as it is called, is one of those states that don’t exist; more precisely, it doesn’t exist since 1991, when they voted in favor of their independence.
The corresponding mountainous region is called Nagorno-Karabakh and it’s inhabited by Christian Armenians, but -thanks to the diplomacy fog that plagues the notorious international community– is universally recognized as part of the Islamic Republic of Azerbaijan.

A land under dispute, at least for a century, after the first genocide of the Armenians perpetrated by the Turks. The Soviet cloak of oppression kept every internal conflict frozen in place for decades, then after its collapse a first Nagorno-Karabakh war erupted.

In this year 2020, while we were kept occupied by the Covid-19 pandemic and the farcical Presidential election in the US, the Turkey-backed Azerbaijanis launched a swift and victorious war campaign against the region’s Armenians. This wasn’t the first and -predictably- won’t be the last Nagorno-Karabakh war.
A month and a half of fights was enough for the attackers to seize most of the region. On one side you had the Islamist expansionism of the Turkish dictator Erdogan, seemingly eager to settle the score with the Armenians, apparently guilty of the crime of living while Christian; on the other side an ancient, small ethnic group, a fierce and hopelessly isolated nation.
Maybe you’d expect observers to sympathize with the latter?

As Europeans we should feel the urge to at least try to do something to help these Christians persecuted for their faith. After all here we aren’t discussing a civil war or an internal conflict: this is instead a classic case of Islamic expansionism. “Whatever is yours must be mine; plus we’ll slaughter those that weren’t wise enough to run away. Or maybe we could allow some of them to stay; as second class citizens, as semi-slaves, submissive and humiliated.”

But alas, no help for the oppressed could come from the NATO allies of the rogue aggressor called Turkey.
In fact just days after the end of the war European politicians sat at a table with their Azerbaijani counterparts, as if nothing had happened.

Blessed are the oppressed: leaving their homeland with no hope to return; abandoned by the civilized world; grabbing as many of their possessions as they could and burning the rest, so that the invaders won’t take it.
Imagine yourself in their shoes… burning down your home, digging up the bones of your dead relatives to be transferred to Armenia, to spare them from predictable outrage and desecration…
Yes, that’s the kind of sick rage that you can expect from the followers of a dark and violent religious ideology, which brings out the worst from people. Blind, rabid hatred. That’s why there’s no shame in fleeing. You can’t “coexist” with monsters.

Barely any news stories surfaced in the mainstream media about Nagorno-Karabakh. We ignored them. We forgot about similar stories.
One of the few journalists that covered this war was Giulio Meotti; a couple of days ago he reported of elderly Armenians who refused to leave their home and -as a consequence- were beheaded by the followers of the so-called religion of peace.

We’re all about Baby Jesus, sure. But never forget: Xmas is the birthday of a Crucifix.