Disturbances in the Force

A teeny weeny incident from last Sunday Mass.
I won’t reveal the nickname I gave to this modern, ugly church, since I hope the fate implied in the name itself won’t materialize, eventually.

It’s a hot August day. The front door is wide open, to give some relief to the faithful sitting in the pews. Most women are shaking the ventagli (fans) in their hands, since proper electric fans are banned due to Covid-19 (risks associated to air circulation are quite erratic and subjective, these days).

Side note: in Italy there’s a document, called Green Pass for some reason, that is required in order to access a certain number of venues, offices etc. If you’re vaccinated (or tested negative in the last 48hrs) you get a green light, essentially. 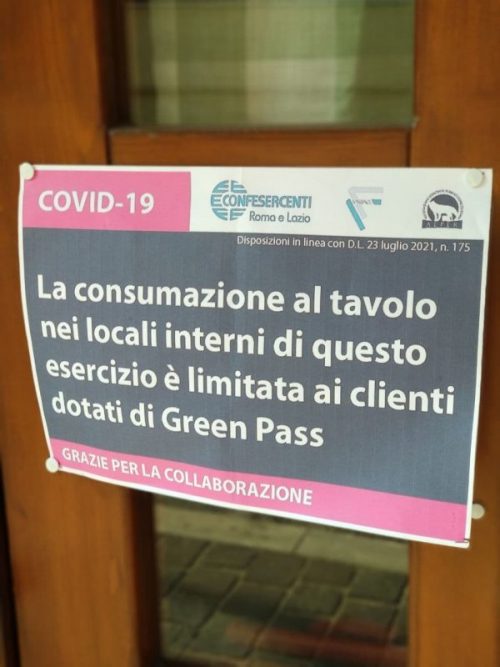 A restaurant notice: dining in is reserved to Green Pass holders

Anyway.
Our Mass is getting to its culminating point, but there’s this loud guy that receives a phone call just then.
He gets out, to the steps in front of the church, and initiates a dialogue where we can hear only one side. He’s basically shouting.
Meanwhile, surrounded by a silent congregation, the priest solemnly proceeds with the consecration.

Here’s what we all heard, word by word (translation mine, of course):

…broke it, and gave it to his disciples, saying: “Take this, all of you, and eat of it: for this is my body which will be given up for you.”

In a similar way, when supper was ended, he took the chalice and, once more giving thanks, he gave it to his disciples, saying: “Take this, all of you…”