Home God Pope Francis: today the Eucharist is for pagans too

Pope Francis: today the Eucharist is for pagans too 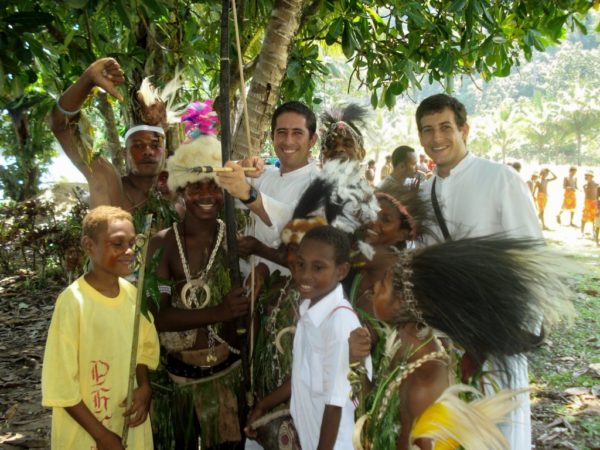 Young missionaries reaching out to non-Christians in Papua

This is the latest gimmick devised to make Pope Francis’ Church That Goes Forth reach even further: giving the Eucharist to anybody who asks; but only today, by way of exception, to celebrate the Resurrection of Jesus.
It’s not just about the divorced and remarried, or fellow Protestant faithfuls. Even non-Christians and skeptics can now participate and receive the Sacrament.
At least if you live in Papua.

This morning, during Easter Mass, thousands of people who had never received Jesus in the Eucharist before were greeted in the churches across Papua New Guinea as honored guests who could now experience a direct, physical contact with God.

As announced by Caleb Eupistos, Auxiliary Bishop of Port Moresby, who explained the initiative to the local press agencies, including cathnews.pg, this is a pilot project meant to verify the public response. The goal would be to extend this new Easter dispensation to the entire Catholic Church in the future, hopefully next year.

It all began last November, when Francesco Panfilo, Archbishop of Rabaul, and Samson Liggelowige, Bishop of Mudah Tertipu, in order to prepare for the next Visita ad Limina (meeting) in Rome with Pope Francis expressed in a letter to the Pope their concern over the evangelization challenges they were encountering. As Liggelowige put it,

Too many pagans, especially in the North, are still enslaved by superstition; their perception of the Catholic Sacraments is marred by deep suspicion, in some cases even fear, since they think our rituals could evoke powerful evil spirits. We wanted to reach out to them in order to prove there’s no magic involved. Nor the Eucharist has anything to do with cannibalism.
Then one of our catechists had this crazy idea: why don’t we let them try the Holy Communion, just once, to let them see there’s nothing sinister involved? God’s Grace could actually inspire them to join our community then.
The idea grew on us. It wasn’t crazy after all.
We decided to formally ask the Holy Father for a permission to go with the plan.
After all Jesus gave Himself to all of humankind, freely.

Nobody knows how many fruits could come out of this initiative, but at the very least we concurred that it would further prove to the world our commitment to inclusiveness, as Christians.

Pope Francis reacted enthusiastically to the proposal, with a handwritten letter to the bishops encouraging them to put their idea into practice. He further added that he wanted this custom to become a once a year Easter dispensation, meant to include not only animists but anyone who wants to get to know Jesus, even atheists; with a special consideration for brothers and sisters belonging to Churches that aren’t yet in full Communion with Rome.

The Eucharist for the People of Goodwill means asking the Grace of Christ to heal the wounds that disfigure the face of humanity, bringing us all together in one large, loving family.

The initiative received a significant response from the general public, including -in some rural parishes- devotees of animism dressed for the occasion in their traditional costumes.

A few dissonant voices were heard as well.

Monsignor Forbes Sta Koppig, speaking on behalf of a group of traditionalists active in Port Moresby, denounced this new custom as nothing short of blasphemous:

The Body of Christ cannot be given away like that, with a sort of reckless “Free bread here!” campaign. This is profanation!
I mean, I’ve seen this parish where many came down the aisle stark naked, wearing only a koteka (penis gourd, Ed.) and in some cases a shirt.
Is this the way they’re supposed to show respect for Jesus?

Bishop Eupistos declined to comment on the outburst, adding only: “I know Sta Koppig personally, I’m not surprised by his reaction and I can still call him a friend. There’s room for everybody in the Church.”