Home God Martin Luther a sort of Christian Icon? Not In My Name

Martin Luther a sort of Christian Icon? Not In My Name 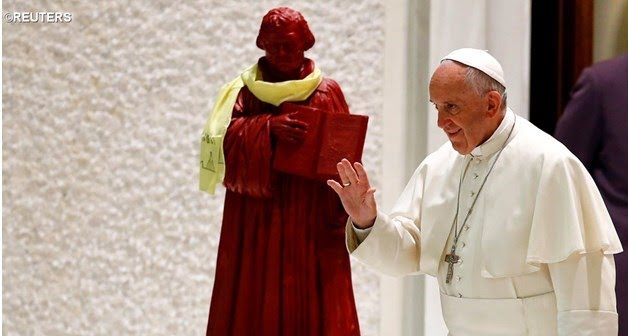 What would you say if you were a Lutheran?

Today in Catholic countries we celebrate All Saints’ Day.

Yesterday the Pope went to Sweden to open this ill-fated year of celebrations for the 500th of the so-called Protestant Reformation. As a Catholic representative, of course.

Now, to better grasp how absurd all of this is, try to put yourself in the shoes of a Lutheran (if you are not already a Lutheran, that is).

Please appreciate the behavior of the Pope and his entourage of sycophants/commentators/self-appointed-spokespersons, as seen from the perspective of someone who’s coming from a distance.

Consider the implications of the photo I put here above. This is not a sort of détente or diplomatic rapprochement. This is not Ecumenism. This looks like a total, unconditional surrender. Declared unilaterally.

Typically, a Protestant today sees in the Pope a good old man, a meek and easily yielding media figure, intent on liquidating a decrepit institution that has come to an end. Finally.

Say whatever you want, this is objectively what transpires in the eyes of non-Catholics. Often met with favor, thanks to the relative advantages that they could obtain from the demise of our Church; sometimes with annoyance (due to the facilitation of today’s general moral decay, through the silencing of a significant voice) or with more or less overt derision. If you have any doubts, enjoy this Lutheran satire.

It’s not by coincidence that this overtly unassuming, wildly personalistic and informal conduct of the Pope, focusing on appeasement (with the exclusion of the faithfuls that happen to be excessively in love with the Tradition) is emphatically celebrated by those very same media entities and intellectuals that were and are hell-bent on destroying the Catholic Church with any means.

Communication disasters, paradoxes, and a general (willful) ignorance of History.

Think about the symbolic impact: it’s Halloween, a Christian holy day regrettably transformed in a macabre hollow occasion for inane partying, some also suggest for satanic rituals (please let’s not get there!).

The Pope is in Sweden to reach out to the remnants of Lutheranism, to celebrate together an event, the posting by Martin Luther of the “95 theses” on the door of Wittenberg Cathedral 500 years ago, that possibly didn’t even happen. This mythical event and Luther’s action brought forth a painfully long season of religious wars; vain in their attempt to impose a “better” Gospel to other Christians, but quite effective in bringing about death, violence, hatred and persecutions.

For what? To establish new versions of the truths of the faith, totally disconnected from apostolic times, propagating them here and there without the participation (or despite the opposition) of the ignorant peasants who couldn’t understand theology but preferred faith to stay put, while enjoying the occasional political revolt. Novel, inconsistent and ever-changing Truths, through a disorderly succession of newer and newer Protestant groups, bitterly fighting each other.
And they insist on calling this mess “The Reformation”.

Speaking of symbolism, coincidentally a major earthquake just destroyed the Basilica of Saint Benedict in his hometown of Norcia; the quake also damaged a few churches in Rome. Some suggested that such an event is representative of the sorry state of the Catholic Church of today, despite the solid foundations that were prominently built, among others, by Saint Benedict, who also happens to be the Saint Patron of Europe.

They want to transform the image of Martin Luther in a sort of Christian Icon. Despite the fact that he was notorious for his foul language, fits of rage, anti-semitism and of course hatred of Rome, including formidable maledictions against the Papacy. A man sowing division and destruction, ultimately as an expression of his inner torment. But we’ll get plenty of opportunities in 2017 to explore these aspects.

Catholics building diplomatic relations with Lutherans apparently lament the reciprocal excommunications as a grave mistake: apparently the fault of excluding was on both sides! As if the excommunication inflicted by Pope Leo X weren’t an obligatory formal act, beyond being inevitable and expected. In fact, for a Catholic, that decision stands, subjectively being both necessary and sacrosanct. If not for any other reason, in order to defend the Eucharist, the Body of Christ, devalued by Luther.

Imagine that! By the same token, next time a policeman fines you for illegal parking, you could confront him by replying you don’t recognize his authority, you can park it wherever it pleases you, and in fact, come to think of it, you grab a piece of paper and write a ticket, arbitrarily fining him! And in a future we could discuss the unfortunate incident of the reciprocal fines between the car driver and the policeman…

No, you really can’t say that excommunicating Luther was a mistake, as Pope Francis did.

It’s curious to observe that most Italian newspapers reported on the papal visit with titles along the lines of: “The Pope asks for forgiveness for the excommunication of Luther”, as entities that appear fully embedded in the joyous surrender bandwagon, but I couldn’t find a similar level of commitment to history reversal in English language news websites. A sign of prudence, or diffidence trying to make head or tail of a behavior that appears to be excessive to those that are not completely immersed in a Vatican Progressive narrative?

Let me be clear: I don’t want to disrespect the office of the Pope in any way or form. You must call a spade a spade though, with intellectual honesty and especially if you love the Catholic Church. Withholding criticism isn’t helping anyone; more so when the net result is people (sworn enemies) laughing up their sleeve or serving you a fake smile with a side of manipulative flattery.

What would you say if you were a Portuguese from 100 years ago?

Martin Luther was de facto celebrated last October 13 in the Vatican, with the horrible statue you can appreciate in the opening photo (the first time I saw it I couldn’t even put my finger on it: who could possibly be the subject of the sculpture? This is too much even for a pessimist…)
Among other effects of the wave of wars and destruction in the name of Jesus Christ set off by Luther, consider the prohibition of the cult of the saints and the destruction of sculptures and other works of art: an immense artistic heritage lost. In Sweden and in many other places, this destruction was imposed by the secular rulers, against the will of the people.

As Vittorio Messori wrote (translation mine).

The king Gustav I Wasa adopted Lutheranism for economic and political calculations.

“The populace felt indignant about it and rioted multiple times, but they were crushed by Gustav. His successors, given the mass discontent for a new faith imposed on them by force, had to tolerate at least to keep a few Marian shrines. A perfect example is the town of Lund, where Francis will go, where all the churches were razed to the ground, except the cathedral, that was just stripped of any decoration, following the Reformed custom.”

And now after 5 centuries, he’s celebrated in the Vatican with a statue, like a saint (which is more than even his most staunch supporters could ever dare to ask for).  Using this kind of logic, a Hunters’ Club could organize a Meat Barbecue Extravaganza in honor of a vegan guru.

It just so happens… “It just so happens” that we are facing another significant anniversary: 100 years since Fatima Apparitions, in 1917. On October 13 even secular newspapers reported on the most extraordinary miracle: the Sun seemed to move rapidly around in the sky, shifting size and color, as witnessed by thousands of people.

I read that this year’s anniversary has been ignored, while on the same October 13 a Lutheran delegation was invited to Saint Peter. These are the circumstances behind the creepy photo with the blood red statue.

Ok, now please try to put yourself in the shoes of those Catholic faithfuls that assisted to the Miracle of the Sun 99 years ago.

Simple, humble peasants, most of them devout cradle Catholics, some on the contrary staunch atheists who were suddenly converted through their witnessing of such a miracle.

What do you think they could have said, if they had the opportunity to hear about the double anniversary of the 500 years since Luther’s schism and 100 from the Fatima Apparitions, being celebrated right on October 13 with a photo op like the one here discussed? Consider also the rumors and messages surrounding Fatima, concerning a dire future for the Church.

Give it a good thought, please.

Come on! Could you possibly maintain that the Virgin Mary committed a grave mistake, by choosing those circumstances to appear to us mortals, where she was set to create a major embarrassment for a future pope, especially in light of all the hubbub surrounding the mysterious Third Secret?
Please, listen to the voice inside you, the one that says: “You can’t suppress honesty in the name of obedience!”

Of course, if you are not Catholic, it’s no big deal. This photo, seen from the exterior, is ok, I guess (and not so interesting). Still, it’s pathetic.

Maybe you are Catholic but you don’t believe that particular apparition is a real event. It’s true that such matters are never part of dogma, you can obviously be a good catholic and reject it. But do you really want to throw away Fatima just to defend the diplomatic choices of the Pope, i.e. the most debatable aspect of his activity, something that has nothing to do with obedience?

Do you really want to go that route, implying that God permitted such a momentous opportunity for sowing confusion in the ranks of His Church? Either through a fake event erroneously officially recognized by the Church, or through the spread of a spurious and dangero interpretation of it, the Omnipotent God would have let  billions of well-meaning Catholics to be led astray by Fatima and the expectation of dramatic developments.

Why for instance the Virgin Mary would have wanted to show Hell to small children in a vision, thus creating the perfect opportunity for devotees to shut themselves away in a sterile traditionalism, becoming suspicious of Church authorities? Couldn’t she appear instead to some reformer, to someone capable of singing a new tune?

How strong is your urge to downplay Church troubles, to insist and deny the evidence?
Enough with evasions and ambiguities. Either you side with Luther or you side with Fatima. You’ve got a full year to make up your mind.