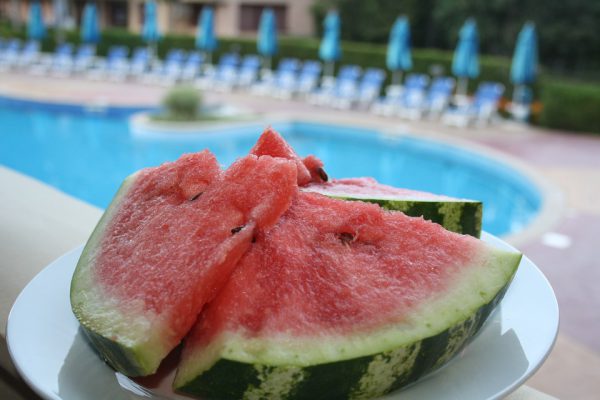 Bonus tip: go for a swim right after meals, it’s good for you!

It’s sort of a tradition for Italian newscasts (and I guess not just in Italy): during the summer, on a slow news day, expect a breaking news report for which they clearly didn’t break a sweat, rehashing the usual slush about the most predictable hot topic. Temperatures!
Dear listeners, it’s hot out there! Drink lots of fluids, prefer light meals and avoid leaving the house in the central hours of the day, especially if you are elderly.

Thanks a lot, you saved my life once again, just as last year.

Actually I don’t watch TV at all, it’s been some 15 years. So I’ve collected only anecdotal evidence of modern broadcast tripe. Your experience may vary.

A few days ago my wife, hearing about a disheartening streak of terrorist attacks, wistfully complained about how she’d prefer those slow news days. But I guess eventually newsrooms won’t miss the opportunityIn fact recently some news websites published -again- that old urban legend about the boy throwing a tantrum at McDonald's to get a slice of cake, and the miffed guy who diabolically decided to buy all of the 23 remaining slices, to teach him a lesson. to serve us some evergreen non-news.

Well, since today the Catholic Church celebrates Mary’s Assumption in heaven, I’m in holiday mode myself. Let’s relax and focus on vacations, sunbathing and swimming.

Which brings my mind to ponder about an eminent Italian mothers’ obsession:

waiting 3 hours after a meal before going for a swim.

By popular demand I’ll answer the fundamental question: does this custom make sense at all?
I recall how it was when I was a child: a sort of torment. Eating lunch in a hurry, taking note of the time at which digestion officially commenced; leaving, getting to the sea and then waiting. And waiting. Man, you felt the heat!

And to think of it, sometimes the idea was that you had to wait a full 4 hours, others swore for just 2. Strangely enough, googling for this story I found out many think you should wait just 1 hour or even 30 minutes!

In my personal experience the amount of hours of annoyance I had to endure gradually decreased as I was growing up, as a sort of gracious concession. In my teens I finally got my sentence commuted to uneasiness: a feeling of guilt for the privilege of bathing immediately after eating.

Whatever. It’s just a myth, in fact anywhere you look for information you are met with the same, reassuring answer. There’s never been, they say, a single documented case of a death caused by a ill-advised bath after a mealAlthough it's fairly common, instead, to hear about people drowning due at least in part to excessive alcohol intake. But this is a different story.. :-)

They used to scare me with the notion that the digestive process causes a flow of blood to the abdomen, thus reducing the amount of oxygen at disposal for the rest of the body. Ok, you may in some cases get colder limbs, but it’s not a big deal. Only over-exertion could cause you to experience cramps, which could be theoretically slightly facilitated by this reduced blood flow after a big meal; cramps are not a reasonable cause of drowning. If you are not a good swimmer and you couldn’t handle a malfunctioning leg you shouldn’t engage in strenuous activities in the water, and a recent meal isn’t changing that.

Supposedly, the real danger was instead the risk of a blocked digestion, due to a thermal shock. The idea goes: you enter cold water, your body reacts to the temperature drop by prioritizing the blood flow to the brain; as a consequence, your stomach isn’t receiving enough support and stops working; then through a series of severe symptoms you lose control, panic and drown.

Well, not that fast. The symptoms range from tremor, fatigue, pain, to stitches (sort of stomach cramps), nausea and eventually vomit; but this crisis develops through a period of a few minutes: this gives you plenty of time to ask for help and/or get to shore, in any case you still got a few minutes more than the typical drowning subject!

Maybe I’m not good at this, but you can easily get info in Italian on the digestive block caused by thermal shock, yet I failed to find an equivalent web page on the subject in English.

It’s funny because Italians are taught since childhood never to drink excessively cold water, again to prevent a stomach block; yet Americans (and Australians, and…?) put lots of ice in their drinks (even wine, I’ve been told… blasphemy!) Is it just a cultural thing? Do non-Italians ever experience a severe acute indigestion due to thermal shock from a cold drink? :-)
Anyway, as I said, this issue is hardly about the risk of drowning.

To be completely thorough, I also checked a 2011 article that asserts a new study surprisingly contradicted all known existing evidence, maintaining that there is, indeed, an increased risk of drowning if you go for a swim after a meal. But it’s definitely bad science, just ignore it. I’m not linking it. Their reasoning: examining a large number of autopsies, they found that almost 8 in 10 people who drowned accidentally had still food in their stomach, compared to slightly more than 4 in 10 among those who drowned while committing suicide. The researchers would want to infer from that flimsy basis a link between food intake and drowning risk. Talk about far fetched!
The actual skew between the two groups could just mean that people who get suicidal are not in the mood to eat.

It’s sad I had to touch such a topic during a summer vacation. When you are supposed to be dealing just with light entertainment and lazy stuff. Well, that’s part of life; now let’s move on.

The assessment stands: there’s no risk.

Therefore relax and let your children free to frolic in the water without unnecessary time constraintsDISCLAIMER: this post does not constitute medical advice. Please always be sure to check and assess all the possible risks. Don't let children unattended near a body of water. I'm not responsible for any of your decision.. Please pass the word!

Oh, I almost forgot. It’s hot out there, drink lots of fluids!