Home God When even the Pope yelds: Euthanasia for a civilization

When even the Pope yelds: Euthanasia for a civilization 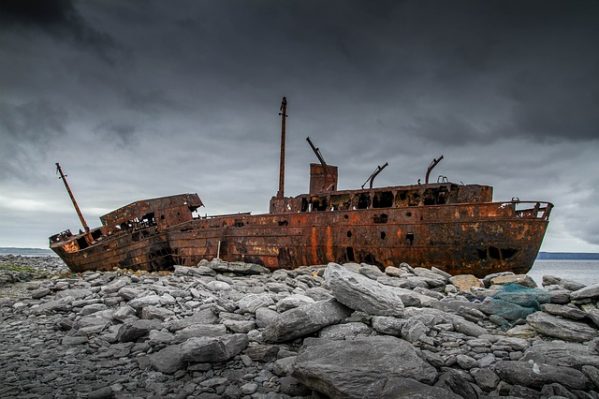 Ship Wreck, by Roland May

We are part of a grand scheme

The election of Pope Francis was a shock to me, second only to the death of my closest relatives. When I heard the name “Bergoglio” proclaimed from the balcony, I felt like I had been teleported to a parallel universe, to the other side of the mirror; a place where everything seems slightly out of place. Just slightly.

Don’t get me wrong. This event may represent just a step of a wider process: the long and gradual decay of western civilization. But non-Catholics may miss the importance of the Church in Rome as a force capable of halting -or at least slowing down- the fall. The last large and influential institution of the planet: united, recognizable, respected, and beyond anything else, representing a complete and coherent thought system. This is not true anymore; at least for the near future, at least in terms of relative political weight and ideological clarity.

I tend to act like the guy who already predicted the shape of the global events unfolding, at least in broad terms, so that I can’t really be surprised. But I made a grave mistake: taking for granted that the Pope would be spared from our culture’s descent into madness; that the Holy Spirit would always give us popes that, even if not always up to the challenge, would at least have a grasp of what it means to fight on the right side.

In this chapter I’m mostly taking cues and paraphrasing from an article (in Italian) by Francesco Colafemmina, a little known but very keen and well-read thinker.

The renown philosopher and post-communist Italian politician Massimo Cacciari once happened to burst out, with unexpected transparency, against John Paul II:

The Pope should stop acting as the katéchon!

In other words (explaining the puzzling Greek word) he was saying that JPII should have abandoned his role as defender of order, of he who keeps the Antichrist from manifesting himself.
Then after the renunciation of Pope Benedict XVI, Cacciari had this to say:

The Pope is resigning because he’s not able to contain the antichristic powers anymore, even within the Church itself.

Curious. A layman like Cacciari, an atheist thinker, writing an essay in 2013 titled Il potere che frena (the power that withholds) describing a (pseudo?-)apocalyptic scenario, taking it damn seriously. As if he were rooting for chaos.
‘Cause that’s what this is all about: the unleashing of destructive forces, tearing our civilization apart. The end of the Christian Age and the birth of a new era, characterized by enmity toward any transcendent order, any authority, any moral laws originated by them. A form of rebellion where, even for unbelievers, the Antichrist is a potent and relatable symbol, of earthly entities refusing to serve God.
In Cacciari’s words:

It’s a universal mobilization, intolerance of any boundaries, the dispatching of any ethos.

According to this philosopher in 2013 the katechon was removed: they got rid of the guy who could hold off this transformation. From that moment on, Church and Empire are still in existence, but they betray their mission; they come to terms with the forces dominating the new era. The Catholic Church giving up its power is part of this process.

After the apocalyptic era supposedly comes the time of Epimetheus (=the afterthinker), an atrophied authority, unable to stand fast and clueless about the future; just like the mythological Epimetheus, this authority is unable to stop Pandora’s box from being opened, releasing all the evils contained within.

Maybe some ‘wide areas’ of competition will emerge, ‘guided’ by élites characterized, even through the conflict among their powers, by their absolute hostility towards any entity outside of their movement. United only in their shared apostasy from the Christian Age.

It goes without saying that these reflections, even from a guy known from TV appearances to millions of people, were naturally reserved to a public of a few initiates, thanks to the flowery and complex prose and the nature of a limited circulation essay.

But try to consider how clueless the average social network compulsive user should be, basing his rants on hearsay! People pompously proclaiming that religious thought shouldn’t influence society, that the Catholic Church is irrelevant, and that -by the way- they have a remarkably unique opinion to express on the topic of the day (by a bizarre coincidence, precisely identical to that of millions of others)…
It’s quite easy to manipulate perceptions for people who are addicted to link sharing and like craving.

The evening of the election, after the spectacle of the new Pope greeting Saint Peter’s square with a shy and mundane “Good evening” in what looked like a surreal atmosphere (even the light was cold and seemed somehow off), I saw the triumphant smirk on the face of Monsignor Vincenzo Paglia, invited as a guest in an Italian National TV talk show. This archbishop at the time had been recently appointed head of the Pontifical Council for the Family, trying to do his best to sow confusion there. That fateful evening he was beaming, the subtext was: “Finally! Now we are in command!”. I went to bed immediately, it was early but I was disheartened.

It’s been 4 years. In the meantime we got wind of some revelations about secret meetings involving progressive bishops scheming to push Ratzinger out of office, with Bergoglio identified as the fitting replacement. In this group, jokingly self-described as a “mafia”, we could find cardinals like Walter Kasper, Karl Lehman, Achille Silvestrini e Godfried Danneels, with Carlo Maria Martini as the leader initiating the process many years ago.

Recently archbishop Paglia (who, we must add, was small fry compared to the above-mentioned powerful cardinals) has been appointed president of the Pontifical Academy for Life, a creation of Saint John Paul II to offer a platform for prestigious scientists and theologians to defend human life since its beginning (abortion) to its end (euthanasia).
Well, it looks like a controlled demolition, meant to hollow out JPII’s institution: activities postponed indefinitely, all the members discharged, removed the requisite to sign a pro-life declaration to be admitted, while progressive code words like gender and human ecology made their way into the new official charter.
Let’s not beat around the bush: it’s a revolution.

Paglia is just executing orders there. But he was also known for his past tenure at the diocese of Terni: he left a huge budget hole, but I guess we could appreciate his contribution to the promotion of the arts. He commissioned a large fresco for the cathedral, where the subject is an unsettling tangle of naked bodies, characterized by a morbid sensuality. This painting represents a flashy display of defiance, meant to provoke, break the rules, put sex in a church environment.

A few days ago Paglia staged a despicable show, emphatically praising the late politician Marco Pannella and his spirit. Pannella, an atheist, was maybe the most important enemy of the Italian Catholic Church of the last 50 years, the leader of the Partito Radicale (Radical Party) that was instrumental in tearing apart the fabric of society, promoting abortion, euthanasia, the destruction of the family, the legalization of psychotropic drugs and even pedophilia (although the battles of the Radicals on this subject received minimal publicity. But there’s abundant proof. After all, their founding principle is the uprooting of any prohibition.) They were successful through clever political machination and tactics, despite their minimal popular representation, but thanks to the unrelenting support of a few wealthy donors (and the media, of course).
According to the words of Paglia, Pope Francis congratulated him for the “spiritual support” he gave to his friend Pannella till his death. Of course the defining character of such support was avoiding to ask him to embrace Christian values, or even mentioning the need to make a clear choice for or against God:

Thanks for your being there, for Marco Pannella lived believing, and paying the price for what he believed him

So, this is the kind of hero that deserves admiration from the Pope, for his mulish believing in something (in himself?)…

A guy who did all he could to push for the exact opposite of what Jesus Christ teaches.
The only positive thing you could say about this radical leader is that almost everyone had a nice word for him. Nobody wants to come out a wet blanket. Not in the good society.
Catholics have become slaves to human respect.

There’s little to add to this bleak picture. It’s really too much. Imagine -I don’t know- the Heritage Foundation organizing a seminary on the life & legacy of Saul Alinsky, plus a public celebration in a park, bronze statue of the leftist ideologue included. Well, it wouldn’t still stand up to this.

Some coincidences smell of collusion

There’s a struggle underway in Europe these days, on the value of human life and the implementation of euthanasia.
Just today we got the news that in France, after a long legal battle, the Counseil d’État ruled in favor of Marwa Bouchenafa, a baby girl that suffered significant brain damage, against the doctors who wanted to let her die; in the UK another baby with an extremely rare disease, Charlie Gard, is waiting for the judges to decide on his fate; again, his parents are lawyering up against the medical staff asking for permission to terminate him.
A few days after Paglia made his show, a tetraplegic Italian ex-deejay went to Switzerland to commit a legal suicide, with the assistance of the Radical Party and much media fanfare.
All staged as a suitable background for the Italian Parliament to discuss a law that would be similar to the French law, formally excluding euthanasia but in practice admitting it.

Technicalities of the various laws notwithstanding, the buzz now is all about guiding the public to the correct choice. Better: to the correct desires.

Guidance that works like this: insert a hand in the chest of the public, grab their heart tightly and pull gently.

In this fateful year 2017 it seems quite appropriate that a decisive battle is fought on euthanasia.
A civilization driven to a morbid attraction to its own death couldn’t find a more suitable token goal.

Against a subtle manipulation of your emotions, gut reactions, irrational fears that morph into a sort of boastful delusion of independence, what could we accomplish by invoking order and rationality?
Little to nothing. We’d need a really authoritative authority, a visible reference point for this rational thought. This way, with a solid community covering our backs, a shared culture and a respected guide, we’d be able to muster the necessary moral strength to hold our ground.
The Catholic Church represented this sort of authority. But today, even when it’s not despised and rendered powerless, it yielded to moral blackmail and petty pietism. It’s failing to hold off the forces of evil from ravaging the land.