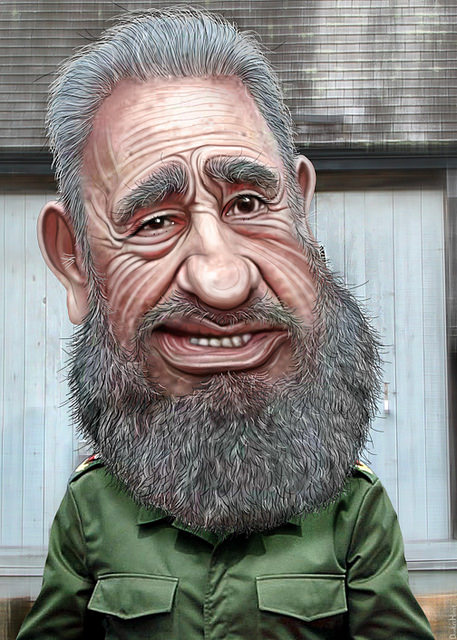 Oh, the ingratitude of the masses! People often fail to properly recognize your achievements.

Face it: Fidel Castro, the Cuban dictator that recently passed away, has done something extraordinary for us. He survived, living 90 full years.

Ok, you may object that dying of old age is not exactly a big deal or something that you do (well, he didn’t die in one of the numerous assassination attempts… this requires a certain degree of paranoia, commendable preparedness and effective opposition squelching).

History should give him credit.

In fact, had he been executed by a firing squad in 1975, as a run-of-the-mill revolutionaryYou may object: 'Wait! What about Che Guevara! He got killed very early, and he became legendary!' That's a naive way of putting it. To go down in history as a remarkable and positive figure, you need to die at the very beginning of a revolution, really: before people get used to your misdeeds. That's when your fabricated image can survive and thrive (even Lenin could benefit from such a construct). But normally for being remembered you need to last for a long time and force others to give in to your political power. And remember, if Castro had lost, few would have ever heard of Che. The legends lives on thanks to the liberal intellectuals and their need to sustain the regime's official lies through the years., you’d probably read about him only in a footnote.

Castro slyly let time pass: an entire generation of Progressives had all the time in the world to mourn the loss of Socialism, to distance themselves from Communism and pretend to be something new and different. Still avoiding any self-criticism, they felt superior through their being always right, even while radically changing their positions.

The Cuban caudillo waited patiently, without dying, the completion of this process. He waited when the rising intellectual stars of the new millennium got sentimentally attached to the swarming corpse of undead Cuba, still wretched and oppressed and yet still untouchable. Their positive prejudice, a mental reservation about the flag of Cuba and its burdensome Marxist legacy, was kept alive while they were waffling about gay rights, global warming, Mother Earth, Keynesian Economics, abortion, Islamophobia and sexual liberation.

And eventually voilà: he served them his very own corpse. The death of a seemingly harmless old man, carrying the weight of a horrible past that appeared conveniently remote and vague (plus a few hundred millions dollars in safe haven bank accounts…). How could they deny him a nice eulogy?

Can you appreciate the invaluable service to our planet coming from Fidel? Even recently, leftist media icons and trendy magazines put the weight of their reputation in defense of the indefensible. See here for some details. They insisted on the infantile scheme: Cuba good, USA bad. And today they saluted him as a great statesman; maybe with some word gymnastics and reservations, just enough to save face.

By dying so many years after his commie’s expiry date, he gave us the opportunity to better observe, understand and unmask the Left: always changing, always the same; hypocritical, still embracing enemies of freedom and humanity, trampling on the poor and on the values that they pretend to champion.

A parade of smart idiots

Behold! Here’s the reaction of young emerging politicians like the Canadian Prime Minister Justin Trudeau after this ruthless dictator’s death:

It is with deep sorrow that I learned today of the death of Cuba’s longest serving President.

Fidel Castro was a larger than life leader who served his people for almost half a century. A legendary revolutionary and orator, Mr. Castro made significant improvements to the education and healthcare of his island nation.

While a controversial figure, both Mr. Castro’s supporters and detractors recognized his tremendous dedication and love for the Cuban people who had a deep and lasting affection for “el Comandante”.

Notice: it’s a prepared speech, with all the bells and whistles. Carefully measured words, maybe from a ghost writer. There’s no slip of the tongue here.

Imagine if Castro had died while Trudeau was still a boy! Without such inane, tone deaf platitudes, we would have missed this opportunity to get a glimpse of Trudeau’s twisted vision and hypocrisy.

As for the content of his words… The people of Cuba, evidently so loved by a man who crushed their souls, reacted as they could; in other words, those who had the opportunity, Cubans exiled in Miami, went on partying for days.

Obama and the French President Hollande were more cautious, mincing words and using craven diplomacy to go through the motions without compromising their position, while throwing a bone to their loony supporters. Here’s Hollande:

A major figure of the 20th Century. He embodied the Cuban revolution, in the hopes it aroused and the disappointments it provoked. […]

He represented, for Cubans, pride in rejecting external domination.

Yeah, right. Proud to be dominated by the Soviets instead of the Yankees.

We know that this moment fills Cubans – in Cuba and in the United States – with powerful emotions, recalling the countless ways in which Fidel Castro altered the course of individual lives, families, and of the Cuban nation. History will record and judge the enormous impact of this singular figure on the people and world around him.

Exactly! You see, if they torture and kill you, or if you spend years imprisoned in inhumane conditions, saying that they altered the course of your life, or that they impacted on you, is a quite accurate description!

From building a world class health and education system, to Cuba’s record of international solidarity abroad, Castro’s achievements were many.

For all his flaws, Castro’s support for Angola played a crucial role in bringing an end to Apartheid in South Africa, and he will be remembered both as an internationalist and a champion of social justice.

Again, all the tired clichés, plus this “internationalism” which in practice means Cuba sending soldiers around the globe to fuel wars and guerrillas, helping other bloodthirsty dictators (Kabila, to name one). Also, sending medical “aid” abroad in exchange of precious cash, to help keep the island’s wretched economy afloat.

Plus getting propaganda opportunities from useful idiots in international committees and from liberal journalists, putting on the mask of the good guy in some baseless tirades filled with a rhetoric that only works with self-loathing Western Leftists for whom every day is Opposite Day.

Irish President Michael D. Higgins, in a long statement where we get again to hear about the alleged progress in education and health care, takes the opportunity to blame the US embargo for the poverty of Cuba, babbles about ideological battles where Castro showed the path to a “more equal world of trade” and “rejected odious debt”. Higgins concludes:

Fidel Castro will be remembered as a giant among global leaders whose view was not only one of freedom for his people but for all of the oppressed and excluded peoples on the planet.

You can’t beat this level of fictionalization.

Enough with the pussyfooting.

Look at Cuba today. Read and listen from witnesses about the depths of violence and misery they had to endure for generations! Yet even today intellectuals are still mincing words and using clever verbal tricks to try and deny reality, defending evil.

It’s difficult to get to precise, documented figures about the atrocities committed in the last half century in revolutionary Cuba. That’s the prerogative of regimes: hiding their victims.

Some report that about 20% of the total population of the island fled; among them, many thousand people drowned before reaching Florida.

One source points to 3600 killed by firing squads plus another 1200 murdered without a trial; others report of 15 to 30 thousands killed.

I’m not in the position to decide who’s possibly closer to the truth.

In any case, even the most optimistic stats require us to realistically come to a conclusion similar to that of Donald Trump, who’s been criticized for pointing out the obvious:

a brutal dictator who oppressed his own people for nearly six decades.

Fidel Castro’s legacy is one of firing squads, theft, unimaginable suffering, poverty and the denial of fundamental human rights.

It’s been said that the Revolution transformed Cuba in a sort of giant prison. But it’s important to underline that before that, under Batista, the island was one of the most prosperous countries of Latin America; Castro and his ilk ruined it almost in every aspect.

Here’s a good article to get a better grasp of what this is all about.
Again: compare and contrast with the intellectual dishonesty of the usual suspects.

The legend of exemplary education and health care standards in Cuba, already highlighted in the politicians’ eulogies above (also one of Michael Moore’s main anti-USA theses in a disgusting fake documentary) is being thoroughly debunked here. It’s not that complicated, for those who keep an open mind: there are some top notch hospitals reserved for the Party privileged class and paying western customers; normal hospitals are instead falling apart, incredibly dirty, lacking even essential drugs and equipment, including toilet paper, sheets and surgical gloves: no wonder anyone entering the facilities with some serious condition is expected to die there.

Of course, Cuba’s official infant mortality rate is very low; exemplary if it were true. But, guess what? It’s a trick.

Abortion is widely used, and among the reasons there’s the elimination of any potentially sick fetus; many newborn who die are also registered as late fetal deaths. No wonder the official infant mortality numbers seem good!
As you can read from Lifesitenews, abortion is the pivot point around which the entire society is crumbling down, due to a lack of moral values, a population rapidly ageing and many other factors (among them a very high rate of divorce).

Abortion figures in perspective: by being conceived in Cuba, even after having survived abortifacient pills and procedures, you’d still have just 1 in 4 chances to avoid being killed by doctors before birth.

An entire nation that needs to start from scratch, to laboriously erase the effects of the Revolution.

People got crushed from the regime, their dreams vanished. And yet at times some seem to feel a sort of morbid attachment to the old lider, falling victim of the media influence and the power of world renown icons. It’s astonishing to see people who lived in Cuba and left, still saluting the death of the dictator on social media with a pathetic “Hasta la victoria siempre!”

We can thank the evil Fidel for his teaching us how stupid we can be, and how in this life usually it’s the worst bullies that win, at least until they die.

Above all, let’s treasure today’s lesson about the hypocrisy of the harbingers of “progress”.