Home God Abortion and Euthanasia found in the Passion of Christ

Abortion and Euthanasia found in the Passion of Christ 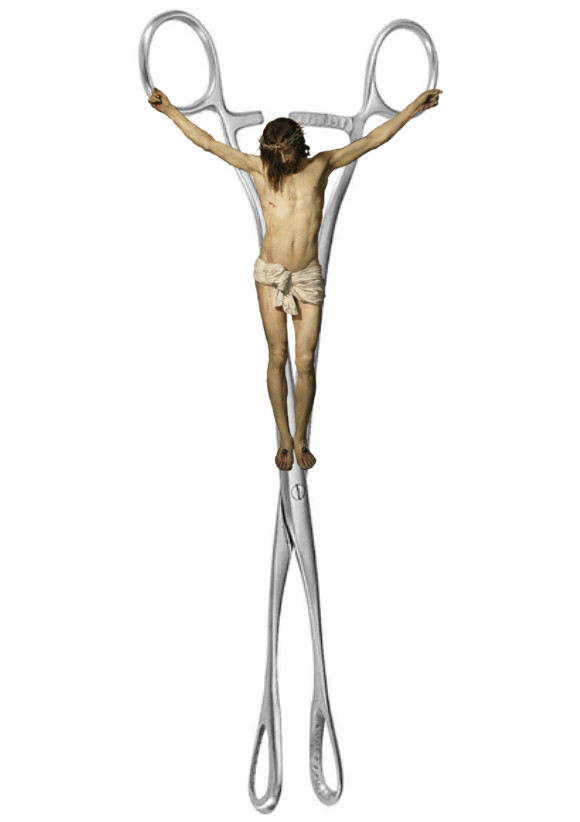 Large numbers of people followed him, and women too, who mourned and lamented for him.

But Jesus turned to them and said, ‘Daughters of Jerusalem, do not weep for me; weep rather for yourselves and for your children.

Then they will begin to say to the mountains, “Fall on us!”; to the hills, “Cover us!”

For if this is what is done to green wood, what will be done when the wood is dry?’

This may be described as a sort of unexpected prophetic parenthesis inserted within the intense and dramatic chronicle of His Passion and Death.
Jesus finds the opportunity to point our gaze towards the future; another sign for the bystanders that there’s much more than meets the eye in that badly beaten man walking to his execution.
A plan. Above and beyond the course of history.

Let me anticipate the objection: of course prophecies are subject to competing interpretations. I’m not trying to imply that what follows is new and revolutionary, let alone the best or the only possible application of Christ’s words.

Of course this is not the moment to address the issue of credibility of prophecies in general, viewed as problematic due to the aforementioned vagueness and possible multiple interpretations. Let’s just say that an atheist may still find here something to ponder: a wisdom, a culture that is rooted in a historical event and seems to be able to deliver cunning insights in the heart of men and social phenomena in general.

-The day will come when people will deem those who are childless to be the most fortunate of all.

-That’s when many will invoke the end: some cataclysm killing us all.

-People will be ruthless with the green wood, even more so with the dry wood.

The most direct meaning: days of great loss and misery. Enough to make people think “It would have been better never to have been born”; desiring a quick demise, putting an end to their suffering.
Dealing with cruel and ruthless populaces would be a byproduct of such a climate, with wars and upheavals all over the place.
A safe interpretation lays in the classic explanation: the destruction of Jerusalem. In the scene, the pious women following the convicts are exhorted to cry instead over themselves and their children: within a generation, in the year 70 after Christ, the Temple will be destroyed by the Romans.
1 million people were present in the city when the siege began, only 1 in 10 survived the event. Accounts of all sorts of atrocities abound; war and fanaticism, people starving to death, trying to eat anything from seeds found in excrements to the leather covering their shields…
Think about what it means to be tasked with burying corpses, seeing your mates fall in front of you: one moment before they were helping you perform this duty, the next minute they’ve become part of the remains…
Even episodes of cannibalism were reported (a mother eating her child!)
This was the catastrophe, happening right after the completion of Christ’s mission, that marked the end of Israel and its role for humanity.

Of course this explanation works. It’s quite immediate and directly connected with the places and people.

But I’m not entirely satisfied. There’s more, I think. In parallel, on a different level.
Here Jesus is referring to Jerusalem, yes, but he also seems to predict a crisis of an entirely novel kind.
Ancient Semitic civilizations attributed to maternity and paternity an immense value. We may as well say all of humanity shared the attitude until very recently. The high mortality rate (infant or not) and the reasonable fear of extinction dictated a no-nonsense order of priorities to society. Necessity rules: family and lineage come first.
We’re unable to grasp how paradoxical the thought of praising sterile people sounded like!

Maybe if Jesus wanted to convey the concept of desperation he’d have used a different wording. Cursing the day you were born is quite different from blessing breasts that have never suckled.
I believe he’s referring to a peculiar age, ours, where for some reason avoiding procreation has become a default position (but we know the reason: widespread prosperity made us weak, complacent, apathetic and egotistical).

Notice: if we avoid taking things for granted and putting extra meanings in the text, there’s no reason why the dire times that were announced should be characterized by destitution, starvation and gnawing of teeth.
Why not an impending catastrophe looming over a prosperous society, while most folks seem to think they’re doing fine?
Our delusions cause us to choose the wrong course of action, therefore we are responsible for what comes next.
An unforeseen, severe punishment is a recurring theme in the Bible. To think of it, even the war that led to the fall of Jerusalem took many by surprise.
Often you give your best when tried by adversities; on the contrary decadence, as is the case today, begets the worst downturns. Overconfident people in these cases tend to assume they are oh-so-advanced-and-sophisticated that they’ve evolved past the ethical conundrum and rules of their ancestors.

Don’t feel safe just because you’re enjoying the fruits of Western civilization. Our gadgets, institutions and safeguards cannot save us from ourselves.

So… where’s the crux of the matter?

It seems the words of Jesus point to a subversion in the perception of fundamental values: “life is good if you’re childless”.
Societies are gradually reshaped based on this principle.
Sexuality is transformed and basically made sterile, abortion is normalized because an unwanted child represents an unacceptable burden: your conscience should be silenced.
This changes everything in the way people interact with each other: if you corrupt mothers you destroy the very foundations of the building.

It’s not by coincidence that John Paul II used to refer to a contraceptive mentality.
Of course the media and “progressive Catholics” scoffed at his supposedly pretending to mix together completely unrelated issues (ostensibly due to what they assume is a default priestly state of uncontrolled sexophobia), but now more and more people begin to understand that he caught a subtle and powerful connection between the normalization of the killing of an undesired child and the will to view sex as a game where you’re supposed to obtain a total control, without any “risks” or responsibility.

Mother Teresa of Calcutta, to name another powerful example of saint, gave great emphasis to the need to fight against abortion, which she saw as an attack against peace on the planet.

Jesus’ words may then mean “Don’t cry over my execution, cry instead over the victims of a society which treats babies like enemies”.
That’s why I created the opening image: the cross is replaced by a surgical instrument used during abortions.

That’s your starting point. But you don’t know where we’ll end up.
For now in the Western world we’re witnessing a demographic collapse, family itself  is under attack, sexuality is being devastated, individuals are increasingly feeling lonely and bewildered; all of this is accompanied by moral decay.

Well, you may object, even if our society is so deeply flawed, we’re still far from invoking the sweet release of death through some spectacular cataclysm. We’re definitely not asking mountains to cover us!
Are you sure? Watch this clip. It’s an Italian TV ad for a famous snack (a sort of plum cake). Sorry, no English here. But you only need to watch the first 15 seconds, which is what most Italians saw anyway, and the dialogues aren’t that important. The whole point of the video would be what happens to people who maintain, despite the insistence of  “smiling girl”, that a snack which is both light and toothsome at the same time cannot exist.

After all, what is a meteor hitting us from above, if not a modern version of the invocation to hills and mountains to cover us?

A flying mountain.
Of course this is just a TV ad, it means nothing except that we’re capable of joking about anything. And yet, how many times, reading about the latest offerings from the (progressive) fools of the day, we’ve jokingly invoked “The Asteroid” to punish humanity and end our misery (I’m guilty as charged).
Yes, it’s a joke, but with a kernel of truth. The end of the world, or at least a mass destruction event, has increasingly become part of our thoughts.
Even not considering green zealots who view human beings as a sort of cancer for the planet, are you really sure that one day we won’t invoke the asteroid with a straight face?

For now it’s relatively easy to keep on going, unsatisfied but cozily protected by our technological cocoons.

What happens then when the system collapses?
If your life dream is a 50+ thousand dollar marriage, and before that securing a stable job and furnishing a beautiful home, maybe the unplanned child should be aborted because everything should be as perfect and under control as you imagined it…
If that’s your worldview, your middle class life would have been a fantastic dream even for kings and emperors a century ago, and yet you feel nervous, depressed, unhappy… what could happen to you if you were to lose everything? How would you react?

We’re living in the age of the antidepressant. Suicide has become part of our reality, yet until a few decades ago it was extremely rare and unthinkable, almost unspeakable of for normal people.

Isn’t it a perfect expression of our modern narcissism, venting our dissatisfaction by imagining a form of death that would take the entire humanity with us?

The prophecy isn’t necessarily about the worst time in history, not in material terms. It’s about the subjective point of view of those wretches who cannot face their worsening problems. They prefer a quick death.
Aprés moi le deluge.

The last piece of the puzzle: “if this is what is done to green wood, what will be done when the wood is dry?”

In the canonical explanation the green wood represents Jesus Christ, the innocent man who’s crucified and is a source of a new life; the dry wood instead represents us, the sinners, a fortiori subject to attacks and disrespect.

But if my reading holds water (and I really don’t think I must be the first to come up with this idea), here we can find a strong corroboration:

GREEN WOOD:
if they kill undesired sons and daughters     ↔     abortion

Abortion comes first. Society initially eliminates children, then evolves and kills the elderly. We’re getting there.

There are a number of reasons for this dynamic. One is that it’s much easier to get rid of someone you’re not seeing, isn’t fully formed yet and wasn’t part of your life. Only after a significant amount of time, when the scarred tissue around your heart has hardened enough, you can proceed with the next step, wanting the death of someone who isn’t living a worthwhile life anymore.

Horrific ends don’t come from material circumstances, they come from what lies inside you. Sin is the source of all this rot. Egotism. Convincing myself that “good” is defined by what I want, and by an amazing coincidence what’s best for my children and for people around me, well… is exactly what I want.

Some of the worst societies in our future will appear to unobservant visitors as remarkable, prosperous, orderly and shiny as ever.

Meanwhile, while I’m finishing this piece, in Paris the Notre Dame cathedral burns!
Many churches have been damaged recently in France by fires or through vandalism.
Is this an Islamist attack? Even if it weren’t, such a terrible event during the Holy Week has all the characters of a symbolic point of no return in our history. Mala tempora currunt.