It’s not what you think it is. 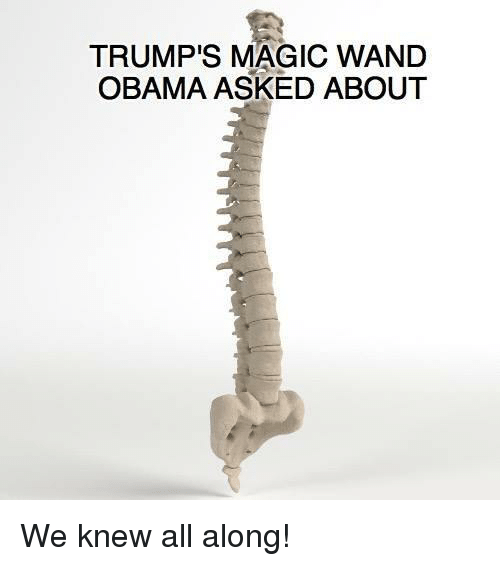 IT’S NOT THE ECONOMY.  The improvement on the economy is just a side show (albeit important and getting all the attention).

In my latest article I highlighted how dysfunctional and violent the Left has become, connecting together angry mobs and callous Washington Swamp Dwellers. But I suggested that Donald Trump is becoming stronger nonetheless. Even after losing the House of Representatives to the Democrats.
How come?

I asked the following question:

What would you do if a good 40% of your citizens were used to the idea that you’re literally comparable to Hitler?

An oppressive regime where virtually everybody that matters is attacking the President. And getting praised for the supposed courage implied by such a conformist act of defiance.

As Trump continues to defy all predictions from his critics, the critics need to maintain their self-images as the smart ones who saw this new Hitler coming. And that means you will see hallucinations like you have never seen. It will be epic.

The reason this will be so fun to watch is that we rarely get to see a situation in which the facts so vigorously violate a hallucination.

What could you possibly do to deal with people like that?

In theory the President was at the helm of a party controlling both the Executive and the Legislative Power, given the Republican majorities on both Houses. Since the Judiciary isn’t supposed to interfere, Trump had all the power he needed to implement his reforms. On the contrary after the midterm election he’s lost the House, therefore Democrats will block him.

Although they’re not accounted for in Montesquieu’s classic formulation of the separation of powers, the combined forces of bureaucracy, academia and media are solidly in the hands of Democrats: a mighty block reigning supreme over the peasantry, no end in sight. When kept for extended periods of time, their influence greatly exceeds the power of the three branches of Government we constantly fret about.
This means anyone on the Right will always face an uphill battle, but at least now Donald & The Deplorables are confronting their enemies openly without pussyfooting around.

The judiciary is less tilted to the Left than the media but still overburdened by incompetent leftist activists. But now that the Supreme Court is solidly in the hands of Republicans the President knows that on the most pressing issues he won’t be sidetracked or blocked by judges. Which wasn’t necessarily the case until the recent Kavanaugh appointment.

The Senate is slightly increasing its Republican majority. But it’s more than that: now some hostile GOP elements have retired, have been defeated or died (John McCain). There’s more legroom for the President to obtain factual support, beyond of course being safe from impeachment and controlling the Supreme Court appointments.

The Mueller Investigation will press on. It will provide ample opportunity for shrill voices in the media performing their act, although by design its principal role is that of covering the tracks of those elements in the Obama Administration, DOJ, FBI etc. who were illegally spying on the Trump team. In fact every time a rogue public servant (swamp dweller) will face serious misconduct accusations/criminal charges pertaining their partisan use of the institutions, they could still interfere/refuse to answer questions from Congress or the Inspector General, with the excuse that there are some critical pieces of information that need to be kept secret due to their alleged connection with the Mueller special counsel investigation. Which is conveniently kept vague, overarching, unlimited in its scope and reach for this very reason (beyond hoping to find something, anything against Trump).

The House still contains many anti-Trump Republicans, but an internal shift of power is gradually happening; more importantly, now they’re the opposition.
The problem for Trump was people pretending to be on his side while dragging their feet; he’s now facing instead a visible opposition from the House, one he could openly discuss and challenge. Even better, he may now negotiate with them.
Any sane person would prefer a visible enemy you can confront to a false friend that is backstabbing you the entire time. Even more so a Master Persuader™ who knows his way around hostile environments. Heck, do you really think that Washington Democrats, used to passively rubber stamp the legislative plans coming from lobbyists while covering their backs, could represent a more formidable adversary than New York real estate sharks?

Some Trump widows like Ann Coulter are calling him on the broken promises from the campaign (building the wall etc.); which is exactly what the establishment Republicans wanted: weather the storm, let the colorful tycoon phenomenon pass and resume course as always; hence, doing as little as possible.
Now of course the Dem’s agenda will always be antagonistic, but he has veto power and they’re put on the spot, they need to do something (which as of late doesn’t seem their strongest suit).

Imagine a Trump proposal where he gives the Democrats a comprehensive amnesty for all those illegal aliens who have a job and didn’t commit crimes (which is a relief, since he really didn’t want to deport millions of people), plus a somewhat inconsequential “prison reform” he was going to do anyway; in exchange they let him build a border wall.
-If they bite he obtains precisely what he wanted from the get-go! Plus he’s recognized as a doer, a unifier capable to work across party lines. And the “scary Hitler guy/Orange Man Bad” narrative is defused.
-If they refuse to concede anything, the electorate could take notice of how he was being reasonable and they weren’t. The call for 2020, to reelect him with the support of a strong parliamentary majority then becomes stronger than ever.
Win-Win.

Speaking of the House of Representatives, a real stroke of genius was his open praise and support for Nancy Pelosi as the proposed new Speaker of the House.
You really have to admire the technique: he’s a virtuoso. I must say I have underestimated him after all.

Politically speaking she’s definitely past her prime, to put it mildly. With her sanctimonious attitude, progressive “Catholic” hypocrisy, cold empathy and calculated moves she’s not the kind of politician you’d want to support.
But here’s why the Donald is the master and I’m just a puny observer. He goes against the grain: she’s bound to face internal opposition, a younger generation wanting to access the levers of power, right? Well, promise her the extra votes needed to become Speaker, regardless of her limited support.
She’s a liability to her party? Good!
Give them rope!

The beauty of this approach is that when Trump drowns her in praise he’s not just helping a weak enemy gain power, nor just adding fuel to the internal feuds between the emerging socialist radicals à la Ocasio-Cortez and the key moderates who were chosen to turn purplish seats blue.
He’s -again- defusing the Orange Man Bad narrative: how could Pelosi convincingly foam at the mouth while hysterically attacking him after this?
A nice trap indeed.

Trump is now feeling stronger and more confident: that you can tell from the firing of Attorney General Sessions immediately after the midterm results, but more importantly from the appointment of Matthew Whitaker as the temporary substitute (Acting Attorney General).

Matthew Whitaker as a Chief of Staff at the Department Of Justice is considered to be a loyal public servant, safely on Trump’s side.
According to standard procedure the removal of the Attorney General would be followed instead by the temporary appointment of his Deputy, in this case Rod Rosenstein.
Since the honest but inconsequential Sessions had recused himself from the Russia investigation for a mere technicality, he left his deputy in control of said investigation, i.e. the slow-motion political-judiciary quasi-coup. That’s how Rosenstein was calling the shots where really mattered at the DOJ, but he’s unequivocally on the side of the swamp.
The general public may legitimately not know about those details, but they are well known to the media! Yet they acted indignant at the sight of Trump firing Sessions plus not appointing the natural substitute Rosenstein, as if he did something alarming and unprecedented. This means they’re dishonest, trying to manipulate you: Trump’s hands were already insanely tied as it was. At least give it to him that from time to time he could try to appoint people who may not want to sabotage their boss!

As indicated by Sundance from the Conservative Treehouse, Whitaker’s appointment may prove quite precious in helping the President unearth some dirt on the misdeeds of his adversaries, preventing elements within the system from manipulating the Inspector General reportAs Sundance puts it, they muddy the waters in many ways: 'redactions in material evidence provided to congress; refusal to release material to congress; fighting declassification of documents that would be damaging to the previous officials; refusal to discuss events with congress by officials who hide behind the shield of the Mueller investigation; the list is long...' on Spygate while is being compiled; that’s why Trump insisted on a couple of unsolicited tweets that he didn’t know the guy directly.

Even though in many respects these 2 years have been spectacular (think of Trump’s foreign policy successes or the economic boom) this president has been unable to keep some of his most iconic promises (the Wall, Obamacare reform) due to a lack of political support in Washington, while at the same time he’s been demonized to unprecedented levels and is still a target for forceful removal from office, using any means necessary.
Now it seems he’ll be able to navigate these rough waters thanks to his cunning: he saw an opening in the extremism of his enemies. In fact they’ll have a hard time keeping their hallucinated composure, crying to high heavens that the end is nigh and the evil regime is crushing good people, while he’ll keep busy doing stuff, improving the conditions of minorities and even holding out a hand to such ungrateful detractors!

A possible comeback (!) for those maximalist fans who were quick to dismiss him after he proved unable to defeat the entire swamp single-handedly and from the get-go, thus are to this day disappointed that he often seems a prisoner of his establishment handlers.

It’s still a rough ride and a lot of things could go wrong.
Most of his advisers he knows he could not trust. Also and crucially, the economy is bound to turn sour. But he’s still our best hope, and he fights with style.