Home World & Media Hey, turns out I’m not a homophobe! Thanks Milo Yiannopoulos!

Hey, turns out I’m not a homophobe! Thanks Milo Yiannopoulos! 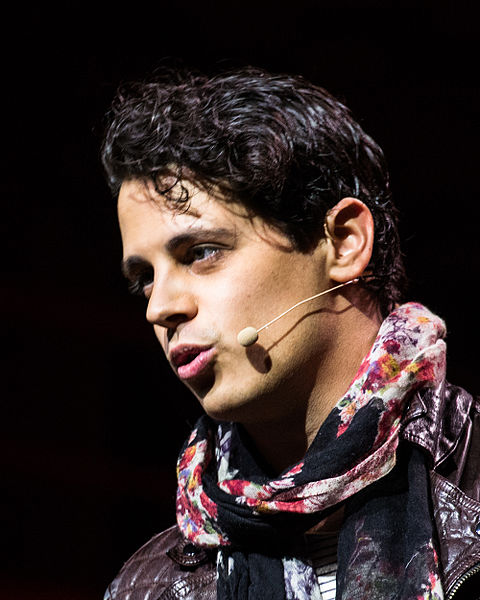 Milo on stage. By OFFICIAL LEWEB PHOTOS [CC BY 2.0]

Milo Yiannopoulos is a unique character, an emerging star, a young professional provocateur launched by Breitbart.com and your best opportunity to understand what the Alt-Right is.

He’s vocationally American, in terms of pop culture and main target audience; yet he’s British, born and raised. He’s Greek from his father side, Jewish from his mother’s (which is the definition of being a Jew, btw). He’s also a practicing Catholic, a fervent enemy of everything coming from the Left, and more visibly than anything else, an exuberant, histrionic gay man. Talk about diverse!

He rails against feminists, politically correct university policies, LGBTQ “culture” and obligatory ideological alignment, attacks on freedom of speech, progressive hypocrisy and leftists in general. He refers to Donald Trump as “Daddy”.

The typical go-to lazy tactic of the Leftist Social Justice Warriors, these days, is to call out everyone they disagree with as “racist”, regardless.  But you can’t call Milo a racist, because he routinely brags about his preference for having sex with black men!

It’s funny to watch him on his Campus Tour provoking lesbians for kicks or sneeringly yet poignantly attack the culture of “triggering” or “safe spaces”, because you know his being a flamboyant, anarchic gay provides him with a sort of free pass: they can’t attack him with their usual ad hominem stereotypes, those convenient polemic tricks that are used to win arguments without ever addressing the issues or wasting energies on rational thought.

He’s disruptive and he throws them off their game, then proceeds to pour salt on their fresh wounds. While acting invulnerable.

Example: one of his provocative articles had a title that did no harm to him, but was used by the mainstream media to fuel their shameless attack on the credibility of Steve Bannon.
Bannon is the new Chief Strategist of Trump’s cabinet, hence a target for smear. As the Editor in Chief of Breitbart.com he was deemed responsible of greenlighting said article (as if anyone could stop Milo from being Milo, suggesting a more diplomatic approach to someone whose mission in life is being the opposite of diplomatic).

“Would You Rather Your Child Had Feminism or Cancer?”

Milo is an interesting, complex fella, because his creating a public persona that could be described as a focused chaos machine is used as a handy cover by a man who’s also quite sharp, clever and reflexive, fragile yet deeply conscious of his personal mental problems; in fact he boasted in an interview:

I have a dark, ADD, Asp-y [Asperger’s syndrome] brain. I’m totally autistic or sociopathic. I guess I’m both.

You should not take him seriously. You should never underestimate him.
In a year and a half he went from unknown to getting 1 millions fans on Facebook.
A new phenomenon is emerging. A movement of people who’ve had enough of the straitjacket imposed on society by the Politically Correct Police.
Young people that are actually coming out as conservatives!

Milo himself is more of a Libertarian, and I must add I don’t subscribe to many of his views.

Eventually he will probably commit some grave mistake, like accusing an innocent, and the media will be all over it. Thread lightly, you’ve been warned.

After studying the subject a bit through Youtube videos and interviews, I’m confident that in a few years, living an extravagant, expensive life, sleeping with lots of men and having more fun in teasing and defying conventions than in what is supposed to be “fun”, he’ll eventually get bored of this media circus, and he’ll settle as a more conventional conservative pundit. Probably even straight (he said it himself that one day he may consider reparative therapy)!

But what sparked my interest in understanding the Milo Phenomenon, when I knew him only superficially, was the rumor that the Trump Administration was considering Milo for Press Secretary. And Milo said that he would enjoy the opportunity to hold press conferences in drag on Fridays!

You know what? I LOVED IT! I love the idea of him preposterously dressed as a woman making fun of journalists, while being the official voice of the POTUS!

So… turns out I’m not a homophobe.

I can’t stomach a Gay Pride Parade, but I like him, even in drag.
I’m just allergic to moral blackmail, to people purposefully trying to exceed the limits of decency and good taste just to rub it in that you can’t have a say. And you should just smile and pretend that even the next, more outlandish provocation will be totally OK for you. This is about submission.

But when something similar is used in reverse, to speak truth to power, it’s quite enjoyable!

Notice that I’m both sticking with my nonconformist and principled decision to never use vulgar language, and enjoying the nonconformist choice of using creative profanities by Milo.

It’s time to learn new tactics to fight against the Revolution. Embrace disruption to disrupt their disruption.