Home World & Media Trump is the answer to Obama

Trump is the answer to Obama 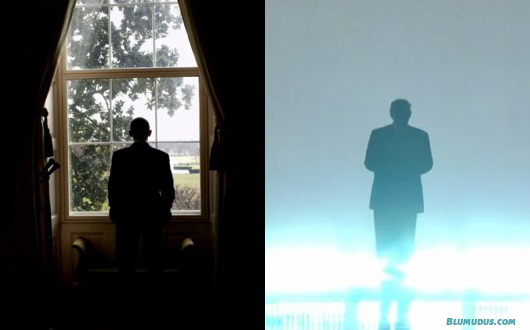 Today is the last day in office for President Obama. It’s been more than 2 months since the election, and yet his supporters are still moping and complaining because Trump won.

In many ways, Donald Trump is the exact opposite of Barack Obama: a reaction if you will. In other aspects, though, he’s a natural successor: another pop icon, the type of personality that could win after Obama paved the way for this new approach to politics and popularity.

Here’s some quick points to raise about their similarities and differences.

New media and the young vote. Barack was able to prevail over a decrepit adversary like the Republican Apparatus thanks in part (especially during the re-election campaign) to a sound communications strategy, including taking advantage of social media and connecting to a younger audience. Donald was able to one-up the Democrats at their game, basing his success on alternative media, challenging the narrative and taking advantage of social platforms like Twitter, Facebook and Reddit.

Old media bias. Here the contrast is as stark as it can be. The level of flattering by media sycophants sucking up to Obama was only surpassed in magnitude by the vitriol and dishonest attacks leveled against Trump by the same outlets. If you count yourself among those who can’t see it, I probably can’t help you.

Although in this case I may guess you were shocked and saddened by the result of the election: one of the primary forces in play was the utter disgust of millions of Americans for the journalists / intellectual élite and their corruption. Welcome to a world full of proud reactionaries.

Ignorance. Obama and Trump are both unable to grasp the complexity of the issues they are called to make decisions about. This is true of politicians in general, but more so in the case of the attention-deficit-impaired tycoon who doesn’t read books and of the overhyped teleprompter-dependent community organizer who never wrote something worth of mention (and once complained that they made him study too much to prepare for a Romney debate).

The fake genius going with the flow vs. the pretend ignoramus challenging the narrative. The mainstream media covered for Obama’s shortcomings by overplaying his capabilities: there was a whole meme about his being too smart to be President, to the point of being bored the whole time during his 8 years (that’s why he spent so much time golfing, I guess). But all he had to do was impersonating the front man and letting his staff fill in the blanks and suggest the next move. That’s how the Affordable Care Act was nicknamed Obamacare, despite the fact that no one on the face of Earth thinks Barack himself could know more than a few talking points about the content of such Brobdingnagian legislation, let alone having had a say in its drafting.

On the contrary, Trump is routinely described as a buffoon. The efficacy of the attacks he’s exposed to is amplified by the fact that in many cases he’s proposing to do away with the received wisdom and choose an approach based on commonsense; this represents an actual change and it poses many more practical challenges.

Wannabe Puppet vs. a One-Man-Show. Trump is in control. His lack of focus doesn’t detract from his discernment; actually it even helps his ability to instinctively visualize the greater picture. He knows where he wants to go, he listens to his experts but he’s quite confident in his role as the top dog, calling the shots.
On the contrary, as I just said, Obama was highly dependent on the judgment of others; quite indecisive when pressed to take responsibility (case in point: his long agonizing over the decision to kill Osama Bin Laden).

Empty slogans for your desires. Make America Great Again is a vague campaign motto. This is by design, in order to let any voter fill in the blank with his/her desires and requests. Donald Trump is actually selling hope and emotions. Preloading the rhetoric with too much content would have been counterproductive. But Obama did the same: in 2008 he won with “Yes we can” (do what?). In 2012 he insisted with a vague “Forward” that really seems a perfect parallel of Hillary’s 2016 arrow: “let us guide you to the future we devised for the country; if something doesn’t seem work, the answer lies in always doubling down. Oh, and don’t look down. This is not a precipice”.

Here’s the pompous rhetoric of Obama’s speechwriters at full steam:

Unbridled fantasies: he could even control Mother Nature, apparently.

But the most revealing quote comes from Obama’s (auto)biography The Audacity of Hope:

I serve as a blank screen on which people of vastly different political stripes project their own views.

Face it: this is a perfect description of Trump too. Hope and Change! Check (albeit using a different wording).

That’s just what works in politics. And increasingly so.

But not all Changes are created equal. The crucial difference: on one side we are presented with a dream, an impossible future; for all the reassurance we get, decadence is actually the inevitable outcome. People are taking notice.
On the other side there’s a reaction: Americans would be content with undoing some of the recent mistakes and restoring the condition they enjoyed in a recent past. To avoid ending up like Detroit.

Foreign policy reshaping: paradoxically, they both are accepting a diminished role for the USA, renouncing the role of world’s policeman. That’s just facing the inevitable. Nowadays even keeping rogue countries at bay is in question (thanks in part to the rules of engagement, the limited options derived from the need to pursue objectives that could look defensible on TV, the unsustainable expense levels). In a way, the world just became bigger. And China looms.

A Self-Destruct Button vs. Regroup & Fortify. But Obama recklessly decided to substitute the One World Power paradigm with chaos, encouraging regional destabilizing since the Cairo Speech, then helping Islamist extremists, directly or indirectly.

He’s become in a way the standard-bearer of anti-American feeling (!), despite such turn of events being inconceivable even a few years ago. The end result is that now everyone is worse off. That’s the madness of calling Progress a decline. Peppered by unpredictable aggressive moves, a lack of vision and a general weakness.

Trump instead represents a reasonable answer: finding more realistic objectives. He doesn’t pretend to dislocate troops all around the globe, to bring democracy through warfare or to embark on nation building somewhere across the ocean. He wants the US to be considered a strong and respected enemy, a reliable ally.

This option is still about regrouping after all. But through a reasonable choice, defending the USA’s interests (and, in the process, some remnant of western civilization).

Who’s the rookie? In the 2008 election, Obama came as a surprise candidate, from virtually unknown to most powerful man on Earth in a relatively short time. Trump instead is arguably unique in his having had the opportunity to plan for his presidency for at least a quarter century.

Rhetoric about race. Trump has been relentlessly attacked by enemies as racist. I’m quite confident of all the flaws you could find in him, this is the least plausible. He’s not racist at all.

Race has become a quick fix rhetorical go-to topic, a cheap trick to win arguments through moral blackmail. And for this reason the US media circus, as seen from abroad, sounds sillier and sillier.

“Illegal immigrant”=”A race”, therefore anyone planning to enforce border security is a racist…

With this kind of asinine syllogisms going unchallenged, the demise of an entire civilization through forced dumbification is guaranteed.

Obama’s election has been all about the color of his skin. I don’t even want to think about humanity in such a divisive fashion. A clearly defined segmentation (White, Asian, Hispanic and Black) as used by the US Police is only possible thanks to peculiar developments of history, and it’s not here to stay. Heck, even Obama himself had a white mother!

And yet the whole point of the Obama Era was that blackness was used as a shield against any sort of criticism against the President, regardless of the merit.

Racial relations. The problem with the Left it that they actually thrive on the criminalization of a certain category and victimization of another. Political Power is extracted from Division in a fashion similar to how you produce electricity from two wires of different metals at different temperature levels (thermoelectric effect).

People elected Obama to try and put racial hatred behind. This Administration stoked the fire instead.

Many Americans then wanted something radically different from Obama’s “The police acted stupidly” and Holder’s referring to the Black Panthers as “My people”.
Trump wants and needs (as good PR) to actually improve the life of people living in impoverished parts of towns where most minorities live. In other words, many voters chose Trump to bring about the change that Obama only promised. And this idea actually makes sense! 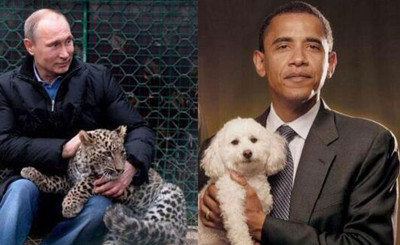 A classic meme, Putin vs. Obama.

Testosterone. I’m sorry, this aspect is central, even if I may be a little too ungenerous with Barrie here. He sounds like an OK guy, someone you could find at a feminist rally protesting the oppressive system created by patriarchy. Or serenely smoking a joint on a couch, just chillin’.

The kind of leader who happens to be in agreement with what everyone is saying.

But Donald won precisely because people can see in him an Alpha Male; one who isn’t afraid to take risky and controversial decisions, is sure of himself and could stand up to ruthless foreign leaders.

The Great Unwashed demanded manliness, for once. Just when it was desperately needed.
The fact that Trump won over a woman shouldn’t distract us from this simple truth. After all, we can say that Margaret Thatcher was more gonad-y than Barack Obama is. :-) I’m sorry I had to say it (not).

You had it coming

All the precious snowflakes from the Left that are throwing tantrums since the Election because they couldn’t accept the result should actually blame themselves for such outcome.

This goes way beyond the US President. It’s a cultural shift. They thought they had won the ultimate battle. That from now on they could outlaw the ideas they don’t like and make deplorable conservatives gradually disappear. They’ve shown their true colors and caused anyone who didn’t want to drink the Kool-Aid to get angry at their bigotry and deep ignorance of humanity.

Liberals began oppressing people in the name of fairness. This is where we drew a line.

As Milo Yiannopoulos said in a recent speech:

“…It is entirely contrary to human nature to allow your opinions, your thoughts, your aspirations, your dreams and your sense of humor to be shaped by the people who want to allow you and disallow you various words.
In fact it produces a counterrevolution. It produces mischief and dissidence and subversion. It produces defiance; it produces Donald Trump!
They did it, they created Daddy! And aren’t we happy about it?” *Cheers from the audience

That’s why those who wouldn’t want to see a Trump presidency in a million years are actually those who made his unlikely run possible and successful.

That’s why after I predicted Trump’s victory I coined the slogan “Donald Trump, the President Americans deserve”.

You opened Pandora’s box. You unleashed the Monster.

The more you insist on marching and staging protests, calling Trump “illegitimate”, spreading fake news stories about some vast Russian conspiracy, the stronger the reaction you’ll get.

Most of what we saw from the media in the last two months is quite clearly fueling Trump’s 2020 re-election campaign.

Will you ever learn?

As for those who voted for The Donald, here’s a toast to you! You deserve it.