Home World & Media Imaginary conversation on a plane in Sweden

Imaginary conversation on a plane in Sweden 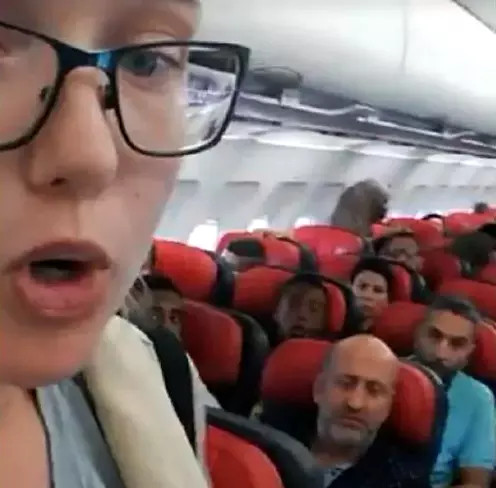 This young student, Elin Ersson, became an instant celebrity because she took a stand against the deportation of an Afghan man from Sweden to Afghanistan: she boarded the passenger plane with which he was being sent out of the country and refused to sit down, protesting the deportation while recording the incident on a Facebook video.
Teary eyed, she must have felt immensely proud for her bravery and humanitarian commitment while the sheepish Goteborg airport authorities caved in and disembarked the man.
This is 2018: people her age have no memory of a world before 9/11. Nowadays air travel is subject to all sorts of security checks: you can be booted out of a plane and severely punished for the smallest infraction. And yet she was successful in her emotionally charged stunt, although of course she was removed from the plane alongside the man she wanted to “save”.
Here’s my reconstruction of how things should have gone instead, ideally.

“They’re trying to take my phone away from me… a person is going to be deported to Afghanistan, where there’s war, and he’s going to get killed.”

Many indistinct voices are heard from all around her. The blurry images capture a few rows of seats, the interior of a packed passenger plane.
She continues: “They pushed me and tried to forcibly move me… I’m not going to sit down until this person is off the plane. Because he will most likely get killed.”

Some other passengers try to dissuade her since she’s delaying departure.
“I’m doing what I can to save a person’s life! I’m very worried that a man is going to die and you’re more worried about missing your flight!”

She sniffs; a tear begins to form in the corner of her eye.

A steward is heard repeatedly imploring her: “Please, Miss, sit down.”

“How could you know that?”

A moment of silence.
Suddenly a thundering voice emerges from a few rows back.

A balding, unassuming man has risen from his seat. It looks like he’s in his late forties; his blondish, unkempt beard and beer gut create a striking contrast with his impeccable suit. He doesn’t wear a necktie and speaks with no accent. What Elin sees from her perspective: a white man.

“How exactly is he going to die?”

The girl barks back in a mix of sanctimonious rage and genuine surprise: “It’s war! Do you understand war?”

His voice is calm and controlled, yet he’s somehow able to deliver a loud and clear message. The entire plane is captivated and follows the exchange in awe.

“Who are you? I don’t have time for your tricks. This is about humanity, don’t you understand?”

“Well, it seems thanks to you we’ve got abundant time to spend. Do you know this man?”

“Of course not. I’m acting on principle here.”

“For all you know he might be a criminal.”

“No he’s not,” she protests. But her voice sounds whiny and hesitant like that of an unruly teenager.

“What difference does it make? Criminals have rights too!”

And old woman interjects almost simultaneously: “But… Don’t you feel sorry for him?”

“Of course I do. Maybe he’s an OK guy. We need to stay human -as you may say- but we also need to be realistic about what we can do.
This girl here just admitted that she’s taking the side of someone who in a war may represent either the victim or the oppressor. Maybe the authorities had their reasons to send him back, huh?”

“I don’t accept your racist excuses! We are better than this.”

“Whatever. You still haven’t explained how war works. Who’s gonna kill him? Another Afghan?”

“In other words you want to protect him by keeping him as far removed from other Afghans as possible. Seems you’re implying that a place full of Afghans is dangerous. Perhaps that’s why we don’t want Sweden to be filled up with them!”

Uproar ensues. Many voices want to chime in. Some call him a xenophobe and a racist, others are content with making noise. Most passengers prefer to stay quiet, avoiding taking sides. The Afghan man also is silent the entire time.

The brave Elin is done. “I don’t want to talk to a bigoted racist like you!” she blurts out.

A distinct man behind her -he looks like a professor- stands up and cries: “It’s not like that! Afghanistan is a war zone, Sweden is not. We can integrate people. You should be ashamed of yourself for what you just said!”
Nods and cheers from the crowd.
He continues: “Besides, the war in Afghanistan is the Americans’ doing!”

The young protester regains her composure: “It’s true! Listen people: if he gets to Afghanistan he may get killed by the Americans!”

“O-K. Let me unpack this. First of all war is a distant memory in our past, in Afghanistan it’s a way of life. I’m not blaming anyone in particular and ideally I would like to be able to help everyone. But you can’t change a people’s culture. This is not about race. It’s culture.”
The guy is on a roll. No amount of moaning on the part of the young lady could interrupt his flow now.
“It’s WAR!” she sobs loudly, her teeth clenched.

“Do you want to know how war works over there?
Yes, you might get killed by the American forces on some forgotten mountain. If you’re part of an Islamist group, that is.
Otherwise, if you’re a civilian, you may die in a terror attack. Things like a city market or a mosque going boom!
That’s war for you. That’s war now.
What’s the difference between Kabul and Stockholm or London then? We’re all living in a war zone. That’s how they want it to be.
The only difference is how many?”
A steward in front of him opens his mouth, tries to say something but no sound emerges. He’s a fish in an aquarium.
The livid Elin has turned her back on her opponent, taking away her phone that is now recording indistinct background noises.

Average guy continues: “How many terrorists dispersed in the population? How many attacks each year? How many victims? These are all strictly correlated. The key here is quantity.
If this man is deported he’s running a small risk of being killed. Had he stayed here, the risk would have been minuscule.
You want to save Afghans from themselves, but all  you could do is import thousands of strangers you’re unable to integrate, eventually OBLITERATING the difference between here and there!”
He just shouted the word obliterating with a staccato sound reminiscent of some old typewriter. Now everybody’s silent.

“That’s when terror attacks will become a familiar sight even here. But where could you flee then? The world will experience real integration, finally!

Oh, by the way. Before the Americans went there, Afghanistan was under the control of the Talibans. With all luck it will still be when they leave. Before you blame the Yankee Imperialists (quote unquote) for everything, you might consider the niceties of living under Sharia Law. You know, things like no job, no education, no music for you. You should try!
Walking down the street in a comfy burqa, escorted by a male relative.”

The guy sits down. His face is emotionless.

Meanwhile a couple of airport security guards have entered the plane, unnoticed.
They approach the girl. She refuses to comply.

They escort her out of the plane, handcuffed.
(Mixed reactions. Applauses, boos, hisses.)

Turns out that the man she wanted to “save” from deportation was indeed a criminal already convicted and jailed for assault, beyond being not eligible for asylum.
She didn’t know who he was, in fact she boarded the plane hoping to be able to rescue another Afghan man who wasn’t there as she expected; that’s why she chose him as the only possible fallback “victim”.
The asinine cult of indiscriminateness requires that you treat people as interchangeable…

Unsurprisingly this kind of behavior, receiving praise instead of a deserved scolding from all the usual suspects in the media, is spreading.

Here you can find the last addition to the record: a woman expresses her anger at the passengers that “saved” a rapist from being deported.

But I must add: part of the problem resides in the leniency in the punishment.
A convicted rapist is sent away on a passenger plane, as if he were just a random guy they sent on a (one way?) trip.