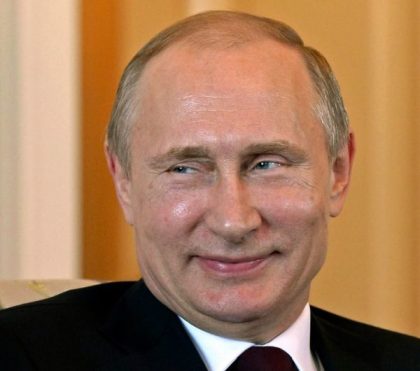 What can you say? It’s ludicrous.

Problem is, all those journalists are serious, and lots of people still listen to them.

Hillary Clinton is ranting about a “vast right-wing conspiracy” since 1998. It’s one of her recurring circus acts.

I’d say now it’s a good time: it would be advisable to finally let her go. She’s an ex.

And yet, here she was, again on TV, railing against those damn fake news that caused Trump’s victory.
Obviously the mainstream media were indignant and eager to follow her advice, calling for a new form of censorship-under-a-different-name, against all those unauthorized voices spreading lies all over the internet. Of course the same mainstream media outlet were and are still peddling superior quality fake news on the side, but that’s another story. Leave it to the professionals!

It was already heart-cringing, if not laughable, that Clinton in August (probably knowing she was behind, official polls notwithstanding) got so desperate to decide to publicly denounce an alleged conspiracy against her, by Russian hackers tasked with helping Trump win, thanks to their cyberattacks to the DNC.

But now it’s even worse. The election is way behind us, Trump is putting together his cabinet… and yet the two news giants, the New York Times and the Washington Post, are simultaneously pushing some shocking revelations from anonymous sources within the CIA (!) alleging that… it must have been Putin’s fault!

The Presidential Election, they say, has been conditioned by the interference of a foreign power!

First of all, those sources are not trustworthy: they are anonymous. Even admitting they reveal details from a genuine CIA report, can you imagine how, facing a “drain the swamp” Trump Administration vigorous renewal of the various agencies, CIA included, many insiders who have a lot to lose may try to weaken the new boss position?

But let’s concede the point. It was Putin’s goons who did it. Fine. Did what? They stole a bunch of emails that revealed the skeletons in the closet of the Clinton Campaing and the DNC!
Are they serious? Do they really want to play the victim part with a straight face?
And what about the motives? This is even better. The Obama administration, styling their foreign policy by being both weak and aggressive (the worst combination!), caused tension to rise with Russia. Therefore the Planet, and of course the Russians, had a vested interest in Trump’s victory, since he had already sent clear signs of wanting to get to an understanding with Putin (who, by the way, is no saint; but your best strategy to keep him at bay is to use the smart tactic employed by the controversially-combed-hair tycoon).

So, to sum it up, this nefarious plot was aiming at letting the least dangerous candidate win, by revealing the DNC tricks to rig the Democratic Primary, plus assorted Clinton Campaign shenanigans (through John Podesta’s emails). What a shame!

Why are journalists still serving us this tripe? Maybe, I dare suggest, because there’s a rumor circulating: they say that Trump chose the new Secretary of State, the top manager Rex Tillerson, who happens to be in good standing with Russia (for obvious reasons, being a businessman interested in international trade). Therefore they are already positioning themselves for the next wave of adversarial reporting: he’s being presented as “close to Putin”. Wait for it. The sky is falling! Oh the foreign plot!

(For those interested, this article explains why the Department of State is a viper’s nest, full of people eager to undermine Trump’s actions. That’s why someone like Tillerson, “oil manager and boy scout”, used to give orders instead of playing politics, may be your best bet to keep them in line.)

It’s not rocket science, after all. More like baseball. Clinton &Co.:

But pundits and journalists seem to be impervious to reasoning. Shameless!

Remember, stoking the flames of a sort of collective psychosis about the Evil Enemy is a very irresponsible and dangerous game.