From Volare to dhimmitude

The week-long Sanremo Music Festival is the most important event of Italian television, and it has been for decades. Including obsessive media coverage and assorted side scandals.
(I’ve previously discussed a Sanremo scandal that didn’t happen: an obviously Satanic-themed song no one but yours truly seems to have identified as such.)
If you’re old enough you may remember VolareWhich means flying; the actual title would be 'Nel blu dipinto di blu', or 'In the blue (sky) painted in blue'. It's the description of a dream., the 1958 Festival winning song by Domenico Modugno that stayed atop the US Billboard Hot 100 for 5 weeks and sold 22 million copies across the planet.

But those were different times, when Italian movies gained international fame and became classics (where are today’s equivalents of Sergio Leone, Roberto Rossellini, Vittorio De Sica, or even Federico Fellini?) while Italian industrial companies participated in a spectacular economic boom projecting the nation in the world top 5.

Nowadays instead -after the Euro experiment and years of leftist social engineering, erasing the Catholic tradition and common sense- Italy has become a faint shadow of itself: in the last 20 years the GDP per capita grew for many developed countries, including USA, Canada and the UK, at levels close to a good 30%, while many emerging economies grew at breakneck pace; even the laggards in Europe weren’t far from a 20% increase. Notable exceptions: Portugal still trailing the rest at 14.3%, Greece hopelessly at 5.3%, Italy last at 1.4%…
Hundreds of thousands of Italians emigrating in recent years, mostly highly qualified; hundreds of thousands of economic migrants coming in, mostly problematic and unqualified.
Even the Serie A national soccer championship, once the most important in the world, is no longer comparable with the top European competitions.

Here we are, then: pampered élites still pretending to matter by fixating on pointless and counterproductive social transformation battles while the entire society rots.
Hooray for euthanasia, anchor babies and same-sex marriage! Meanwhile more and more companies and shops close down, 27% of youngsters between 15 and 34 are neither employed nor studying and fewer and fewer babies are born… So depressing.
But hey, at least we get the opportunity to virtue signal.

How lovely! We’re so open to Islam and multiculturalism!

Alessandro Mahmoud  was born in Milan by an Italian (Sardinian) mother and an Egyptian father. As a singer he goes simply with Mahmood.

He won the Sanremo Festival with a song titled Soldi (Money) which is said to be autobiographical: it’s a sort of musical rant against his (Muslim) father who left him when he was 6, then suddenly resurfaced when Alessandro became famous and made good money…
At first blush you may think this is about denouncing those Muslims like his father, who marry western women and ruin their lives. Some through violence, others by taking them to an Islamic country, others still by leaving them without support as in this example. This is an angle that some tried to play, but it’s hardly the point.

A key element of the song, even if it may have been added for tactical reasons, is represented by the verse: “He drinks champagne during Ramadan”.

That single reference is the only one related to religion of the entire song, but it’s sufficient to make the piece Islamically Correct.
The father is the bad guy here, no doubt. But he’s not a good Muslim, on the contrary, he’s a hypocrite: he drinks alcohol, even during the sacred month!

Let me further clarify that the song itself is musically ugly and pointless. I had to listen to it once -just to write this article- and I must add Mahmood doesn’t even seem to be a particularly talented singer.

How could this forgettable piece of bad music -even containing a few words in Arabic– win the most important Italian music festival?

Simple: it represents an opportunity to push the leftist agenda.
The Festival di Sanremo was accompanied by a number of declarations, monologues and controversies about the need to embrace migrants. Where of course the vast majority of people disagrees with the unanimous voices coming from singers, authors, journalists and the rest of the TV bandwagon.
Well, a music competition is supposed to be about the music…

I don’t know if Mahmood views himself as a Muslim; I don’t know, I don’t want to know and I have a right not to care about this guy I had never heard of before. Although if I had to guess I’d say he’s not, mainly due to his bio; but this hardly matters from the point of view of the Umma: if your father is a Muslim you have no choice, you are supposed and required to be a Muslim.

It doesn’t matter. Mahmood represents a new beast: The Muslim Italian. Even beyond his true self. That’s the character they wanted to reward with the 1st prize.

Bonus: through this song the concept of fatherhood gets to be attacked too, which is icing on the cake of modern culture nasty fixations.

There’s no doubt this is the usual media suspects’ doing.

In fact the convoluted selection mechanism of the competition gave a 50% weight to people voting by phone from home, the other 50% of the result was determined by a jury of typical leftist personalities and by journalists.

Here’s the result of the selection between the three finalists as determined by the public: Mahmood was in 3rd place with just 14.1% of the votes. 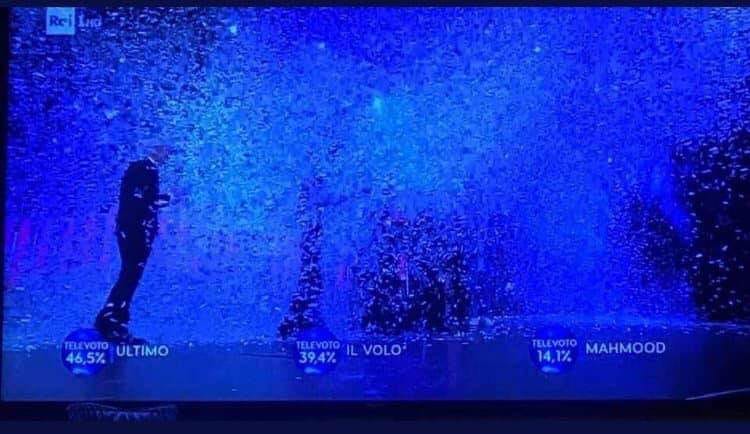 Crushed by his adversaries. But the experts thought otherwise, and reversed the result.

Isn’t this a blatant example of how the élites are completely detached from the feelings of the people? Here there isn’t even some excuse due to artistic merit, since the winning song has hardly any value in that regard. It’s just petty, stupid, naked politics.

If you’re so eager to show the world that you favor all things Islamic right now, even when there’s no real pressure to do so… how could we expect you “leaders” to be able to show some spine when the time will come to choose between risking your neck or playing kiss-up to some Muslim overlord?

Told ya: I knew nothing about this guy, never heard of him until yesterday.
Turns out he’s homosexual.
Which is perfect for the modern progressive: he represents a new and improved Italian.
The gay Muslim who is secularized and effectively attacks the concept of fatherhood!

To put things in context: last year’s winners were two men who were rumored to be homosexual.
Two years ago the Sanremo Festival winner was a gay guy who’s into Buddhism and sang about our Western Karma (but at least the tune was catchy).

Now lots of social media commentators are jubilant for the pro-migrant victory… Hyperboles everywhere. Mahmood has even been compared to the African American legendary athlete Jesse Owens triumphing in Berlin in the presence of Hitler…
Here’s a title from the leading newspaper Corriere della Sera: “We need more Mahmoods. The inevitable integration that enriches the country”.

Is this culture, pop or otherwise?

Oh, and by the way. Once again the spotlight goes to someone who’s homosexual and coincidentally had serious problems with his father in a critical phase of his growth.
Because he was “born this way”? Yeah, right!